Rick Perry - The Establishment's Ace in the Hole

May I introduce you to this fine product:
That's because we'll all need to speak Spanish in order to get along in the new North American Union that Rick Perry has allowed to progress in his state. He's not going to come out and boldly say that he is leasing our highways out to foreign countries, that wouldn't be a politically viable move, would it? Rick Perry has worked hard for his globalist masters to put in the Trans-Texas Corridor, which would have been a major step in dissolving the sovereignty of the three North American countries. From an old Jerome Corsi article:


In the hotly contested summer round of public hearings throughout Texas, strong local opposition was voiced to Perry's plan to build a 4,000-mile system throughout Texas over a 50-year period, removing in the process some 580,000 acres of land from public tax rolls and displacing an estimated 1 million Texans from their ranches, farms, businesses, and homes through eminent domain. 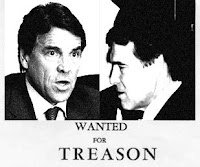 But all he has to do to get the idiots on board is talk tough and use words like "fed up" and "succession" and "yee-hah" and our publicly-schooled idiots will clap their hands and act like none of this stuff in his record exists. The pavlovian media masters wipe the whiteboard of the public memory clean once again and the conservatives of America act like something will actually be different this time, another Texan is in office, oh wait.... No that whiteboard has also been wiped clean, the last Republican did not get the federal government into every local school district's business and further socialize the health care program with a Medicare  prescription plan. No, that wasn't socialized medicine, baby steps, master, baby steps. So anyway, everything will be better with Perry as president, his name starts with a 'p', and president starts with a p, he's got alliteration going for him already. He's got real Texan boots, to boot out the liberals. yeah..

The reason that I'm doing another Rick Perry post is that on the Instapundit poll, he's leading and I think that everyone who follows politics in the blogosphere ought to know exactly what they're supporting. Over at the Patriot Action Network, they'll tell you all 'bout former Al Gore campaign manager, Rick Perry  - some really disturbing information. A sizeable chunk of the TX population hates Rick Perry's guts and their opposition candidate gets a good chunk of the vote, but it's always split with the Democrat, always resulting in a Perry victory. Debra Medina got torpedoed with the charge of being a Truther, when all she said was that if the families want more of an investigation, they should get one. Which is exactly what Mrs. Sarah Palin said when asked about it, but she'll not get called a Truther. Why? I'm thinking she's going to be the Rick Perry running mate, to help all those conservatives who may be pausing at the rumors that ol' Rick isn't what he seems. Sarah will make it go down easier, to shut off the brain and pull the lever, or push the button.

But as a conservative woman, wouldn't you love to see another conservative woman in the White House? I would like to think I'm not so shallow as to vote for someone because they've got the same plumbing as me. I really want to like Sarah Palin, but unless she starts talking about the banking cartel that runs our country and is at the root of everything wrong - from funding the UN's Agenda 21 to the worldwide economic implosion, I'll know that either she's oblivious or is one of them. Either way, it ain't good.

What's this? I just found a copy of..

The Establishment Script Wizard
The part of Texas Governor should be played by a man not less than 6 feet in height and not completely butt-ugly. He should speak with a passable Texan accent.   Connecticut Yankees may need more training in this area should they wish to win the part.
The governor will be required to publicly appear "conservative" to maintain his position, do lots of photo-ops with firearms, act like a cowboy, always make a big deal of signing prolife legislation regardless of personal feelings, overall, do his best John Wayne impersonation. These little tricks of the trade will allow globalization and collectivization to advance into the United States with little or no impediment. Opponents who point out the leasing of highways to foreign corporations can always be marginalized as "kooks". We will ensure that this information doesn't make it into the Texan press by buying up outlets not in our control. No one will believe that our man would do such things as the public will always see him wrapping in the flag doing his best All-American boy impersonation. I know, I know, it is disgusting. But if we're patient, the mundanes will be at our mercy and we can stop dressing as one of them.

Here are my other Rick Perry posts:

Posted by republicanmother at 10:05 AM