For your consideration, a timeline of Wikileaks events from a Redditor, to which I have added links and comments in bold:


Here is a brief timeline of events:
Apr 16th: John Jones QC, Assange's U.N. Lawyer dies jumping in front of a train. [As seen in House of Cards]

Jul 10th: Seth Rich, DNC staffer who supposedly leaked DNC documents to Wikileaks, is shot in the back and dies. Nothing is stolen from his body.

Oct 14th: John Podesta tweets "I bet the lobster risotto is better than the food at the Ecuadorian Embassy”.

Oct 18th: Pamela Anderson visits Assange and feeds him a vegan sandwich. [She has also been seen at Marina Abromovich's 2011 "art dinner" - which is off the chart bizzaro, creepy, satanic.....- along with other celebrities, which answers the question of why our Hollywood/Art scene is so messed up - another post for another day.]

Oct 18th: Witnesses photograph and report heavily armed police and vans outside Equadorian Embassy, are barred from approaching and have cellphones confiscated. Live feeds are cut off.

Oct 18th: Fox News reports Assange will be arrested in a matter of hours.

[This video was later memory-holed]

Oct 18th: London Airport evacuated due to "chemical attack", potentially used as cover to fly Assange out of country.

Oct 20th: /r/wikileaks, /r/dncleaks, /r/wikileakstaskforce and /r/nsaleaks add 21 new moderators and remove previous mods, all threads about Assange going missing deleted since. [This is on reddit, the website founded in part by Aaron Swartz, another depressed person who suicided themselves awhile back. I can say that it has changed a whole lot since he passed.]

Oct 20th/21st: Wikileaks tweets 5 tweets with misspelled words. The incorrect letters spell "HELP HIM". The Wikileaks twitter has never made a spelling error, let alone 5 in two days.
[This has been debunked, but it is true that there were no spelling errors prior to this date-the twitter account has definitely changed.]

Oct 21st: Massive DDoS attack on US internet. Wikileaks tweets to imply the attack originates from its supporters, asking them to stop, no evidence supports claim. [They may have taken out the internet to keep his dead man switches from activitating]

Oct 23rd: Wikileaks Tweets poll asking how best to prove Assange is alive (he still hasn't appeared on video or at the window since). [They do like parading his cat wearing a neck tie in the window, however.]

Oct 26th: 4chan users successfully successfully decode their first message in Wikileak's blockchain. Threads are instantly flooded by shills saying that it's not worth looking into. The blockchain is blocked with fees and 43000 unconfirmed transactions appear in the mempool. [God bless weaponized autisim!]

Nov 6th: Huge DDoS takes down Wikileaks for first time in years. [Again, they may have blocked swtiches from being activated.]

We also find a fair amount of oddness in the recent John Pilger interview of Assange where we see evidence of Morph cutting and no pictures of Assange and Pilger in the same shot.

What does it all mean?

It could mean that Wikileaks, if it is compromised, could put out info on whoever they want using the credibility 100% accuracy track record over ten years that Julian and his cohorts have established.

Julian may have someone out there who is not supposed to throw out his dead man switch until it is confirmed that he is in fact dead. The parties responsible for this bizarre situation may be keeping the illusion of him being in the embassy to further their own goals, or just be in a holding pattern until they figure out what to do.

Julian may be alive, but renditioned to who knows where (this article surmises Charlotte, NC). There is an old joke that a $2 wrench will be break the tightest encryption when applied to the encryptor. I sincerely hope that's not the case.

The original Wikileaks caches has been archived, and there's plenty there to chew on. It's shown us that that the DNC conducts themselves like junior high school girls and not professionals, which is reassuring. It's shown us that those in the inner circles are compromised and probably blackmailed what with all this satanic spirit cooking and pizzagate mess. We also learned that Hillary smells of boiled cabbage, farts, and urine according to Podesta. Yes, we have learned lots of things from the bravery of Wikileaks.

Many people have been totally freaked about the Spirit Cooking stuff. My daughter was witnessing to many online who were atheists, but are now reconsidering that position based on sheer creepiness of those images. I hope this all serves to wake people up to the true reality that the Bible state:

For we wrestle not against flesh and blood, but against principalities, against powers, against the rulers of the darkness of this world, against spiritual wickedness in high places. Eph 6:!2

This is a subject I've explored many times on here before. I do like to get to the source of things, and as a Christian (born-again, non-churchian kind) I understand that to be Satan and his Legion. I don't know how much more blatant it could get when you check out the satanic images associated with it all.

UPDATE: Looks like he is ok. I'm sure there's a lot more going on behind the scenes.
Posted by republicanmother at 10:01 AM No comments:

Thoughts on the Best Election Ever

This will have to be a bullet-form post, as I am on my seventh baby and am getting about four hours a sleep a night if I'm lucky due to restless legs syndrome. Yes, I've tried Magnesium and continue to try different things to get my leg muscles not to twitch at night. My due date is New Year's Eve, so I've got a ways to go with this. I've been dealing with it in earnest since sometime in September. I've dealt with it in the past three pregnancies - on the fifth, I was given Ambien, but I'm going with midwives this time and they aren't allowed to give that. I've got my 5 and 7 year old going to school on account of their severe speech problems, so I have to get up at 5 to get them on the bus at 6. Meanwhile, my oldest is off to a local college most days doing the dual enrollment thing. This leaves me with two kids, 11 and 13 to homeschool. They're having to learn to be independent, which is what I want. They both have some learning "issues" which makes it complicated, but hopefully everything will work out before they grow up-ifkwim. 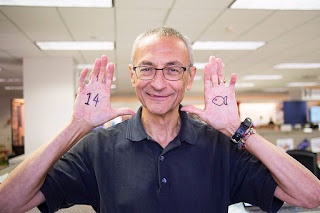 found on this forum
So the significance of the 14 and the fish goes back to Egyptian mythology surrounding the birth of Horus. Recall that Blavatsky and Theosophy revolves around the ancient mystery religions of which this type of thing would qualify. The Spirit Cooking stuff springs from Alesteir Crowley's satanic Thelema religion.


People tell me that Hillary is acting ‘like a retard’ since her head injury. Frankly, considering her normal behavior, I’m surprised anyone noticed! (this is a joke!) Have someone talk to her doctor and see if there’s anything he can give her.

Posted by republicanmother at 9:28 AM 6 comments:

Sorry I haven't posted in a year.  That's what life does to you when you have a bunch of kids growing up.

I'm just happy to say that it's exciting to watch the news these days. I love what Trump said about 501c3 churches. Never thought I'd hear that in my lifetime. I've been very interesed in the mechanization of the modern church, which I hope to post on in the future.
Posted by republicanmother at 7:42 AM 4 comments: