You have to search high and low to find a politician who will tell it like it is. Here is Belgian MP Louis opposing support in Mali vehemently:

Update:
Whoops, as Anon mentioned, you won't get this unless you hit the closed caption button located in the bottom of the Youtube window as "cc", then you will get the English captions.

Get a load of that guy behind him--wonder what he's up to?
Posted by republicanmother at 1:41 PM 2 comments:

Fat Boy Morgan Gets Told How It Is

by Gerald Celente, the guy that Oprah used to have on her show years ago before crap got weird. You see, Gerald calls the trends like he sees them and stopped getting the mainstream invites when he refused to compromise his service by telling everyone that it was sunshine and roses when there was a finanical catastrophe on the horizon.
Posted by republicanmother at 4:21 PM 5 comments:

Posted by republicanmother at 1:29 PM 5 comments:

When government gets this unpopular, they get extremely nervous. When they stop listening to the people and I'm sure everyone of you had better health care solutions, but they don't care. They only listen to what the huge corporations pay them to care about. When this many people hate your guts, you're bound to get paranoid and want to use everything in your power to protect yourself from perceived threats. Hence gun grabbing. Weapons seizure is a historic reaction to a government  seizes power. 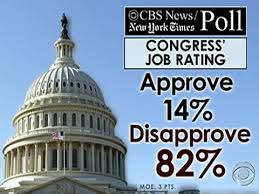 Posted by republicanmother at 12:49 PM 2 comments:

Here is John Corbett, first breaking down the stigma of the word conspiracy, which is the engine of history, by the way. He follows it up with lenghty, video evidence of everyone's favorite Polish insider (because America has to import it's sneaky people we don't have enough of our own kind.), author of The Grand Chessboard and others, Zbigninew Brzezinksi: CFR, Trilateral, Bilderberger (2 meetings), etc.  admitting what he does. John makes the point if YOU tried to say what he says on national TV, you would be huffawed off the air, but because ZB talks like Ernst Blofeld and is a member of SPECTRE, he gets away with it. Watch and learn how he plays the media like a violin, pretty easy when they're paid off not to call him on it.

Posted by republicanmother at 4:24 PM 6 comments:

Marine Veteran Sentenced to 30 years for not being a Snitch

Not sure what exactly is going on here, but there are supposed to be court documents forthcoming. All I can say is that this fits with the FBI's pattern of setting people up so that they can knock them down. This is what happens when you don't agree to be a snitch. They wanted this guy with a popular Youtube channel to infiltrate the "Patriot Movement" for 2 years or ELSE! He chose the latter.

Apparently, they tried to get him on molestation, that was the first trial mentioned below and he was found not guilty. Then they found a "grenade launcher" at his home during a raid. This I get from those who were following this guy's Youtube channel. I have not verified all this myself, but none of it would surprise me one bit. Recall the FBI visited that high school boy for his Ron Paul video and wanted him to infiltrate Anonymous. But to our Marine Dyer, if you check it out for yourself, and find his cause worthy, there is a petition here. His videos are a little over the top for me (wears a mask), but you know what's more over the top? Setting up honorably discharged Marines with bogus charges because of their patriotic politics.

"When freedom fails, good men rot in filthy jails, and those who cry appease, appease are hung by those they tried to please."

MARINE WAS GIVEN A GAG ORDER! NOW IS SERVING 30 YRS IN PRISON!
MARINE Veteran who served 8 yrs in Iraq has been unlawfully convicted to 30 yrs in prison!


PETITION: US MARINE TARGETED BY GOV AND GAG ORDER PLACED ON HIM TO SILENCE HIM!
December 13, 2012 · Started by Deborah Swan · Invite Friends · Reposts 1
To: MARINES, US MILITARY MEMBERS, VETERANS, PATRIOTS, CONSTITUTIONALISTS, US NAVY, US AIRFORCE, TEA PARTIES, OATH KEEPERS, US CONSTITUTIONAL MILITIAS, US ARMY

MARINE Veteran who served 8 yrs in Iraq has been unlawfully convicted to 30 yrs in prison!

A gag order was placed over Sgt Charles Dyer, and he was told he would be arrested if he spoke out about the events that took place during his first trial in Stephens County Oklahoma!

This former Marine was targeted by the FBI due to his outspoken voice and his Constitutional speeches he was giving at many Tea party / Patriot Events across the country.

Charles Dyer also known as July 4 Patriot or J4P, has a gift of "speech." and was becoming very popular within the Patriot / Tea Party Community. Sgt. Dyer also grew a following online because of his YouTube Channel.

Sgt Charles Dyer was not aware of how he was targeted by the FBI until he was charged with a crime he did not commit.

Not long after this all began, was it becoming more clear to Charles that this was a intentional attempt to silence him and shut him down. A gag order was placed on him.

Charles Dyer was offered a "deal" by FBI...

FBI Agent Gene Pool told Sgt. Dyer that if he would "work" for the FBI for 2 yrs and help the FBI infiltrate the Patriot/Tea Parties/Militia Community, then all these criminal charges that were pending against him would "disappear."

FBI Agent Gene Pool handed Sgt. Dyer a list of objectives to review, but Sgt. Dyer looked at Agent Pool, and told him, "no thank you."

Sgt Charles Dyer wanted his "rights" to a "trial" where he would be given his opportunity to share with the jury his defense.

Sgt. Dyer believed in the Justice System and was looking forward to his day in court where he could then show his innocence and clear his name from these false allegations.

All his evidence that would of shown the jury that Sgt. Dyer is innocent, has been covered up and not presented to the jury during trial.

Judge Enos and the District Attorney has committed extreme violations, and this must be exposed.

District Attorney Jason Hicks's office has evidence that shows Sgt. Dyer is innocent, but will not allow this evidence into court!

This type of abuse of powers and controlled information must come to a stop! Now the life of Sgt. Charles Dyer is at risk due to this horrible conviction.

Sgt. Charles Dyer's mother Janet Dyer has been threatened that if she did not cooperate with the FBI that they would make her son go away for up to 40 yrs!

Mrs. Janet Dyer also over heard some Stephens County deputies discuss what they were going to do to Charles Dyer when he gets convicted. Mrs. Dyer heard them say "they would put him in general population and see how long he will last."


The FBI and Stephens County Oklahoma have railroaded Sgt. Charles Dyer, and now has convicted him to prison for 30 yrs!

PLEASE help save this man’s life!

Posted by republicanmother at 6:39 AM 7 comments: 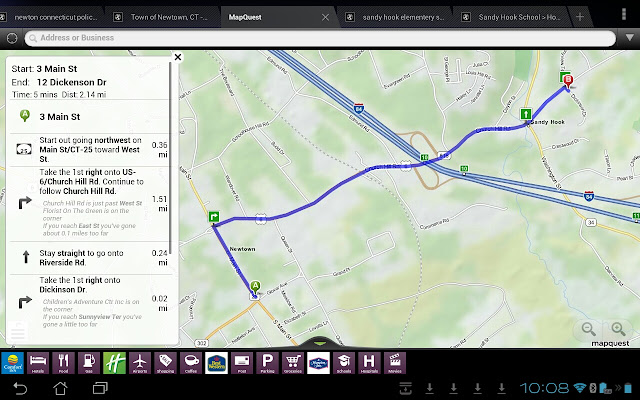 We are told that it took 20 minutes for police to arrive on the scene at the Sandy Hook Massacre. We get this information from the CNN timeline posted by The Lonely Conservative who also thinks 20 minutes is a tad long for a 911 school shooting call.

But anyway, I did something really interesting: I used this thing called mapquest, and about 30 seconds worth of internet searching to obtain the addresses of both the school and the police station. I then entered these into mapquest to obtain a driving time between the two points. I know, I'm a real journalist that way. So I find that the police station and the school are only 2.14 miles apart, and it only takes five minutes to drive it, and I'm assuming the speed limit through most of that is 30 - 45 miles an hour. If they turned on the sirens and really moved, I think they could have managed it in like 90 seconds if they were really trying that is. Could be that they were all at the FEMA training going on in Bridgeport about 30 miles away that same day and time. The topic? Planning for children in emergenices.
http://www.dailypaul.com/267596/fema-was-running-a-drill-between-9am-and-4pm-on-december-14th-in-connecticut


Also food for thought is a local CT cop who has his own questions on the Sandy Hook situation:

Posted by republicanmother at 8:42 PM 32 comments: