Southern Baptists, George Soros, and the Alt-Right- Psy-Ops in Progress

I know I haven't been blogging at all lately, but that doesn't mean I haven't been constantly studying and analyzing current events. My interest lately has taken me to the religious sphere and what the Enemy is doing there. I'm so relieved and gratified to see so many more people take a closer look at the globalists and money changers doing their devious deeds, but the religious arena is not getting as much attention.

I have a varied religious background- my dad was in the New Age movement, which means you just read a lot of books about it. Yet we put forth the Christian front in public. We didn't go to church much growing up, but everyone I grew up with was either Church of Christ or General Baptist. After I got married, I got baptized in a Southern Baptist Church, then spent some time in a KJV church, after which I worked hard in another Southern Baptist Church, and since have floated in similar style churches. The point being, is that I have personally witnessed how Southern Baptist churches have changed in just the last 15 years: there is a different spirit in the house!

So the SBC has this thing called the ERLC, the Ethics and Religious Liberty Council, which is their lobbying arm that hangs out in the Swamp of DC. The guy in charge of that outfit is Russell Moore, whom Donald Trump called a nasty guy. He used to be a democratic staffer for Gene Taylor. He's all down on the Confederate Flag and what he calls the Alt-Right movement. He also heavily intimated that evangelicals who vote Trump weren't real Christians.

So when the SBC had their annual meeting this summer they denounced what they called the "alt-right" movement. They are painting the picture that all the alt-right, a label that many might use to describe myself, are skinhead white supremacists. As anyone who has been following this movement of populism for the last 10 years knows, this movement involves freedom loving people from around the world from every color and creed. But the SBC is trying to redefine the term alt-right to its people as hateful skinheads or something.

So when that obvious false flag provocation in Charlottesville happened, Russell Moore and his buds are on it like white on rice! He's tweeting up a storm about these dastardly alt-right people


The so-called Alt-Right white supremacist ideologies are anti-Christ and satanic to the core. We should say so. #SBC17
— Russell Moore (@drmoore) June 14, 2017

Oh, and he's holding up Senator Ben Sasse as a model statesman. Recall that Ben Sasse was the guy who was a tutor in the Congressional page program when Denny Hastert was still the big dog.  Ben is also the guy that Jack Probisec attempted to interview (links to video)  and absolutely freaked out and ran away, saying "you're a liar!!!", like a toddler. Weird. I follow the twitter accounts of these leaders in the SBC and it can be quite amusing to watch them sit and tweet at each other all day long. Seriously, it's taken me six months to scrape out a few minutes to slap this post together, but these guys literally sit and tweet at each other in their cushy offices every fifteen minutes. They then take incredible vacations, but will harp on how Christians need to give more. It's disgusting, so back to this issue at hand:


The ERLC is part of the Evangelical Immigration Table, a group that receives George Soros money, about 3 million in the 2009-2010 fiscal year alone. That year it also recieved  a million from the Ford Foundation. Added to this, Ken Barbic, also the Chairman of ERLC is a big lobbyist for big Agra who benefits heavily from the cheap and easily exploited immigrant population. These big wigs at the top of SBC are sold on the idea of immigrants replacing the diminishing native SBC congregants.

You may have heard of the old joke, these kids come to school with a something that represents their faith. The Jewish kid brings a menorah, the Catholic kid brings a crucifix, and the Baptist kid brings a casserole. The SBC brand has been completely destroyed by a number of different factors: failure to preach on reality, Calvinism/Lordship Salvation, music changes, manipulative outreach techniques, a new way of doing things every three years, and brain drain. Each one of these could warrant its own post, but you get the big idea. The deacon who arrives at church with a Sons of the Confederacy bumper sticker and loaded down with sweet potato casserole is in the cross-hairs of Russell Moore's SBC.


So we all know this Charlottesville thing is about as phony as a $3 bill. The fact that these SBC "leadership" types are calling the alt-right the Spirit of Antichrist on cue after demonizing the alt-right just a couple of months ago makes me think this whole thing is a psy-op to keep evangelicals and SBC people from forming a coalition with the alt-right, a group that includes all of our conspiracy analyzing friends. I can tell them that all the good ol' boys out there love Donald Trump and nothing in the world is going to change that. When Donald Trump called Russell Moore a nasty guy with no heart, he nailed it.

Posted by republicanmother at 5:44 AM 2 comments:

I'm so happy to have her here on the other side of my tummy! The insomnia associated with the restless legs syndrome is finally over! She was 8lbs and 7oz. She had some trouble breathing upon being born and had to be transported to the NICU from the birthing center. By the next morning, she was doing fine and had graduated to the regular nursery by the end of the day. I think we have met our family out-of-pocket now! Thanks Obama for taking all of my disposable income!

Seriously, when my 13 yo was born, the individual deductible was $250, and now it is $1500. The out of pocket max was maybe $1500 and now it is $4000. I used to be able to budget around $1500/pregnancy and now I have to basically plan on the full $4000 for the same services I've always gotten. We had a hospital admission last spring for my younger boy, who apparently has some birth defects that were undetected, already costing me $4000 on him. Our calendar year starts over in April of all things, so I'm trying to think of what else to do medically before it starts over. I so hope we see the insurance rates come down to where they were just ten years ago! 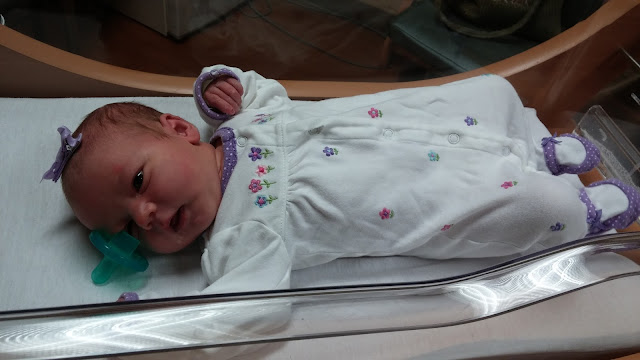 Posted by republicanmother at 10:41 AM 4 comments: