What HAVEN'T I Been Doing?

Taking a break from blogging this summer to truly get my house in order. With each new baby, there's a deadline to get it together now that there's going to be ____ kids.

To begin with, I repainted the playroom with a semi-gloss, for easy wiping. I also added the chalkboard and painted a brown particle board entertainment center you can't see blue, the inside of the closet blue and the window sill that same blue. The doors are off the closet, which contains more shelves of toys. I made a valence real quick to go over the window. Prior to repainting, the room was Freddie Mac Forclosure tan covered with smudgies.


My mom took the kids one night and my husband and I went to the movies. I got up early that morning after taping it up that night and painted over the ugly tan a pretty purple. In time, I made the curtains from some clearenced fabric at Walmart and some light blocking fabric I bought 10 years ago for an apartment window I never did sew curtains for. These curtains are no-sew, I just sewed enough felt at the top to make the blocking fabric long enough and then used big safety pins at the top to stick the two together. I used a roll of purple ribbon cut into 12 inch lengths to tie the stuff up on the rod. I repainted a shelf white and reused some decorations that would go with purple. I took one of those sign your name oversized matte frames and covered it with the fabric from the curtain to frame a cross-stitch sampler I did in high school. The crib is to the right and I got a real cute monkey sticker off of Amazon to go above it.


I've also spent a great deal of time getting ready for this fall's co-op classes. I'm taking it easy on myself, not teaching a science class, but instead a visual phonics class for little folks and a creative writing class for jr. high kids. For the visual phonics, I made five super hero capes with the vowels sewn on the back. My oldest and artistic daughter illustrated the booklets I made that explain the phonics rules, which are heavily dependent on the pictures. We're going to be pretending to be letters and acting out how they "behave" when they're together. I'll be playing the part of Mommy E who tells vowels to say their name. I already have a dopey dress picked out for the part.

My oldest daughter won't buy off the rack. She has to have her dresses be at least knee-length, sit a certain way, etc. So I made six jumpers for her to wear over a tee-shirt. I reverse engineered this one dress that she absolutely loves to get the pattern. One turned out too small, and that was the one that was too "loud" for her anyway. Her little sister seems to like it so that wasn't a waste. The thing that took the longest was that my zipper foot disappered. So I spent a long time sewing in all those 22" zippers by hand. When I was all done, guess what I found in the middle of living room floor? Yes, my zipper foot! It took me three solid days of sewing to get this goal achieved, but I knew it was the only way I was going to have back to school clothes for my 14 year old.

But that's not all. I promised my 10 year old a butterfly garden. Thankfully my mom and stepdad brought the big rototiller to get a spot ready. The ground here is pure red clay, so I tried to work some peat moss into it. We've got two butterfly bushes and lots of marigolds. I also bought a couple of really pretty cosmos, but they didn't thrive so much. As you can see, we don't weed eat much round here. Note to self: it takes about 6 cu feet of mulch to cover this bed up. 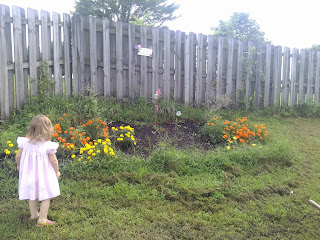 I also planted a garden, which looks pretty shaggy. I planted corn, potatoes, melons- the whole deal. But I didn't do any weeding seeing how I was so pregnant. I also didn't nag my kids, mostly because I thought they would pull up  the plants along with it. I would put up a picture, but it's just too embarrassing. We've decided to call it the rabbit preserve. They have so enjoyed my tomatoes and canteloupes. But the attempt at the garden did take a lot of time.

Getting ready for this year of homeschool was also an endeavor. Getting together the money to get the curriculum before school started AND before the baby came was a tight situation. But I got it together so that I could go through it all and make the necessary copies. From my Mystery of History CD, I was able to print off all the maps, quizzes, and choose what activities I wanted to do, causing me to print off pictures from google and such. The third volume of MoH doens't have the activities and instructions in the book, it's all on the CD, so I printed that out as well. I put all this stuff in a huge three ring binder. So all my kids work is already hole - punched for history, anyway. I'm using Writing with Ease and printed out "workbooks" from the student pages for my middle kids. I suspect it's too easy for my fifth grader, but she needs to reboot her writing, and it only take five minutes to do. I got the Ultimate Homeschool Planner by Debra Bell and it is pretty cool. It has spaces for up to six kids. Perfect for me right? It has a yearly planner where you can put in birthdays, co-op days, etc. Then it has a monthly planner and the rest is full of weekly planners. It has spots for academic goals, charachter goals, hospitality/outreach projects (which we tend to forget about), etc. I list what I want to do for the week over the weekend and then transcribe that into my older two kids' planners. This is working well for my highschooler, who can see what her week's work entails and she can get it done without coming to me constantly for new instructions. My next oldest needs some help in focusing. In our first week of school, we got done prior to 11 just about every day. This week has been more hectic as I've had three appointments and it's real hard to get them to do their work when their routine has been broken.

Another thing we've been working on is establishing cleaning routines. I'm not a routine person, so this is very challenging. So far, the laundry hasn't gotten behind. We still have a ways to go before we've acheived a "sustainable" sense of order around here.

Oh, and the most interesting thing on my "to do" list was getting my baby samplers cross-stitched. I was behind on my last baby, but I got hers done and on the wall in the toy room. I was working on the current baby's sampler when I went into labor five days late. Actually, I wasn't actively working on it as it was 2:30 in the morning when I started to feel a "real" contraction (after a month or two of false labor). I planned to take my sampler with me when I went to the hospital to take my mind off of it. Well, I wasn't far enough gone for them and because I was doing my needlepoint, they assumed I wasn't in labor and sent me home. I continued to have contractions the rest of the day, but they started to get bad across the afternoon. That's when I started making stitching mistakes. Because a lot of guys read this blog, I skip the details and just say that I went in at 4:30 pm and she popped on out at 6:00.  I was really looking forward to my nubain IV painkiller that I had with the previous four kids, but this hospital wouldn't give it to you that late because it will make the baby sleepy. Thing is, I don't need painkiller before then, but anyway.  Note to self, don't cross-stitch while in early labor. I'll also note that labor is more pleasant at home. My 2 year old started "breathing through" her diaper change - she copies "everything" I do.

So I had to let the blogging go for the summer so as to get things in order. You don't need me to tell you the world is a screwed up place. I hope that I will be blogging again soon on a regular basis as we get into our homeschool schedule.

Thanks for all the kind comments and for stopping by!


Posted by republicanmother at 8:01 PM 4 comments: