All My Heroes Have FBI Files

Saw this here and thought it was pretty cool.
http://libertyblitzkrieg.com/2012/12/18/all-my-heroes-have-fbi-files/

Obviously these people aren't all my personal heroes, but the point is made that the "eye" is watching people of import. Another point is that the Federal Reserve System has been paranoid for a while now. 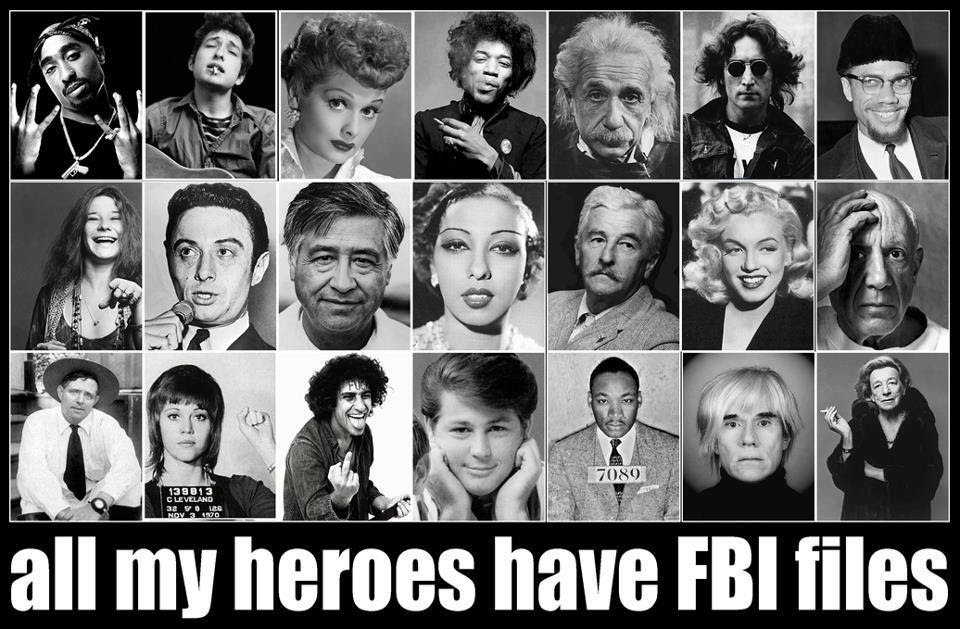 Posted by republicanmother at 6:48 AM 3 comments:

While watching the news this summer, I sort of wished I had the ability to telepathically blog. What have we seen? Hmmmm.
We've seen John McCain root for Al Qaeda.
We've seen some elements of the government plan this latest psycho -gun grab routine.
We've seen the Fed say they'll print money until the cows come home. (Which will never be allowed to happen as the USDA will promptly shoot them for emitting methane.)
We've seen a high school drop out put the entire intelligence network of Vampire Squid to shame.
We've seen Christians slaughtered in a proxy war that "we're" paying for. (I dislike the collective "we".)
We've seen police officers murder/beat up/molest civilians without due process as more routine. Hey, it's the quick way to paid vacation.

So that's all hell in a hand-basket kind of stuff. Mostly because we lack the perspective to properly assess what is in fact happening. We have been given a Fisher Price cutesy reality to dream in, while reality has been marching along without us. To paraphrase Jefferson, those who wish to be ignorant and free wish for that that can never be.

Going back to my personal hero, Mae Brussell, she is here describing the way in which a "psycho" killer is used by the government for the purposes of destabilization.

Note that if you parallel Berkowitz with this Aaron Alexis guy, you find a lot of similarities. Also, I think Dr. Pieczenik has a good take on the latest "postal" incident.

--Give him a very textured,  psychiatric history of complete mental health illness,  throw the DSM V at him.
--"Aaron Alexis complained of hearing voices and ringing of the ears",  the LAW ENFORCEMENT OFFICIAL SAID ANONYMOUSLY.
--Keep all attributions ANONYMOUS or make certain those who know him can give only a very bizarre picture of him.
--NAVY OFFICIALS (never identified) said that although Aaron had shown a pattern of misbehavior;  which included insubordination  and unauthorized absences,  A.A. was awarded the NATIONAL DEFENSE SERVICE MEDAL and the Global War on Terrorism SERVICE MEDAL.

I mean the guy is "going crazy" but has top secret clearance? Seriously? This just leaves us with these options:
1. Our military is incompetent in giving out clearances, and no longer deserves our trust and funding.
2. Our military deliberately allowed this to happen for Machiavellian purposes.
3. Or it's all some sort of an act for Machiavellian purposes.

The fact that the SWAT team was ordered to stand down in this incident, according to the BBC, tells you that the fix was in.

Posted by republicanmother at 1:45 PM 2 comments: