I hope everyone has a great day recalling what today is really all about--the Lord Jesus Christ!

Before I started my research into "why things are the way they are", I understood that the Blood of Jesus saved me from my sin like the blood at Passover saved the Hebrew children. I understood that the world was doomed on an intellectual level, but I didn't understand the minutia of how the principalities of darkness were actually operating.

Often, we Christians talk about the spirit of evil, or the "devil" in such generic terms that it seems more like an esoteric concept than a reality. Since I've been researching what is really going on, the importance of Jesus' sacrifice takes on a whole other dimension. Lucifer and his minions can seem like fairy tale villains or a quick excuse for when you mess up. Seeing the involvement with the occult and subsequent vileness unleashed by means of careful, multi-generational social planning, I understand on another level why Planet Earth needs a Savior. What a comfort knowing that God has everything under control; He has a plan to thwart all the confusion and chaos those pesky principlalites of darkness are throwing into the world.

Christmas is a reminder of a Sovereign Savior who is most surely coming again. That is the primary reason that the worldly forces attack it with such rancor. But the root of Jesse is in too deep for these reprobate spirits to pull it out. Praise God, He has opened the door for for us to escape.

Posted by republicanmother at 4:55 PM 2 comments:

Chicago minorities vent their frustration at the machine that produced Obama. Nice.
Posted by republicanmother at 12:39 PM 1 comment:

The average American still cannot tell you what the Federal Reserve is, how it came to being, or how it is destroying our country today. Over at the Economic Collapse blog, Michael Snyder has put together 100 facts about the Federal Reserve, one for each year it has robbed the United States of its wealth. I found numbers 32 and 33 most interesting:

#32 According to an official government report, the Federal Reserve made 16.1 trillion dollars in secret loans to the big banks during the last financial crisis.  The following is a list of loan recipients that was taken directly from page 131 of the report…

To put that information in proper context, check out G. Edward Griffin, the most well-respected researcher of the Federal Reserve breaking down how the Fed is a cartel:

How about we listen to a "genius" like Thomas Edison's opinion. I hear he was good at math:

That is to say, under the old way any time we wish to add to the national wealth we are compelled to add to the national debt.
Now, that is what Henry Ford wants to prevent. He thinks it is stupid, and so do I, that for the loan of $30,000,000 of their own money the people of the United States should be compelled to pay $66,000,000 — that is what it amounts to, with interest. People who will not turn a shovelful of dirt nor contribute a pound of material will collect more money from the United States than will the people who supply the material and do the work. That is the terrible thing about interest. In all our great bond issues the interest is always greater than the principal. All of the great public works cost more than twice the actual cost, on that account. Under the present system of doing business we simply add 120 to 150 per cent, to the stated cost.
But here is the point: If our nation can issue a dollar bond, it can issue a dollar bill. The element that makes the bond good makes the bill good.


Moving back further in time:

I too have been a close observer of the doings of the Bank of the United States. I have had men watching you for a long time, and am convinced that you have used the funds of the bank to speculate in the breadstuffs of the country. When you won, you divided the profits amongst you, and when you lost, you charged it to the Bank. You tell me that if I take the deposits from the Bank and annul its charter I shall ruin ten thousand families. That may be true, gentlemen, but that is your sin! Should I let you go on, you will ruin fifty thousand families, and that would be my sin! You are a den of vipers and thieves. I have determined to rout you out and, by the Eternal, (bringing his fist down on the table) I will rout you out.

I keep this quote on the bottom of the blog because it is so astute:

"The Federal Reserve Bank of New York is eager to enter into close relationship with the Bank for International Settlements.... The conclusion is impossible to escape that the State and Treasury Departments are willing to pool the banking system of Europe and America, setting up a world financial power independent of and above the Government of the United States.... The United States under present conditions will be transformed from the most active of manufacturing nations into a consuming and importing nation with a balance of trade against it."-- Rep Louis McFadden, quoted in the New York Times, June 1930

The Congress shall have power to coin Money, regulate the Value thereof, and of foreign Coin, and fix the Standard of Weights and Measures. 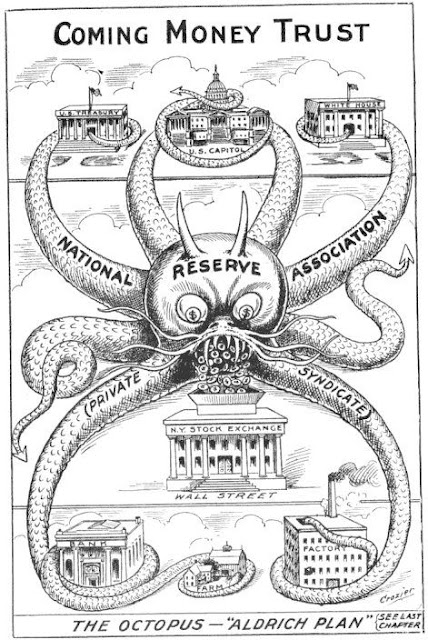 Do Justin Amash and Louis McFadden look similar to anyone else?

Posted by republicanmother at 7:14 AM 2 comments:

Nothing is Beyond "Our" Reach

Behold the emblem of the United States National Reconnaissance Office:

Because that's not creepy at all. Nothing says Peace on Earth like a giant consuming octopus.


I'll direct you to Mayor Hyland's quote on my left sidebar and leave you to judge how correct he was about describing the shadow government (read: organized money) as an octopus that grips our land.

Remember that S.P.E.C.T.R.E stands for SPecial Executive for Counter-intelligence, Terrorism, Revenge and Extortion.

And why is it our National Security experts always have creepy eastern European accents?

You might have a government problem when your government is out and proud with its octopus brand.
Posted by republicanmother at 1:20 PM 4 comments: