According to this post at Lew Rockwell, a waitress at a Greek restaurant says that her daughter and son-in-law were coming over from that austere country. She said that middle-class folks were digging through trash cans for food.

The post further goes on to recount that everyone but the usual suspects with the Swiss bank accounts are getting totally shafted. Riots are gettting more dangerous. The native police can't be trusted because their salaries have been cut and they, too, are royally ticked off. The solution? Call in the Mercs!

The Greek government has hired Blackwater, which now operates under the name Academi, (seems like they change their name every two years or something) plus five other such merc companies to keep order. Read: keep the mundanes from slitting the throats of those who never seem to go to jail, never lose any money, and always have JP Morgan et al on speed dial.

Coming to us soon? I hope not -  spread the word about the playbook, and they'll be forced to use another one. Hopefully not the mousepox scenerio...
Posted by republicanmother at 5:10 PM No comments:

They Want Somebody Dead: Is It You?

I'm sure by now you've heard about the massive stash of bullets that the Department of Homeland Security aka Brownshirts for the 21st century has purchased. Recall that DHS was formed in consultation with the ex-chiefs of the East German Stasi and KGB, putting the total in totalitarianism.

I'm sure you've also heard that "law enforcement" agencies have purchased a whole lot of targets that look like everyday white Americans to use at the range or on pop-up targets. They have grandma and grandpa targets, pregnant women, little kids - all of which are white people. I never get into the whole racial drama stuff, but I'm beginning to feel like someone is zeroing in on my particular demographic. 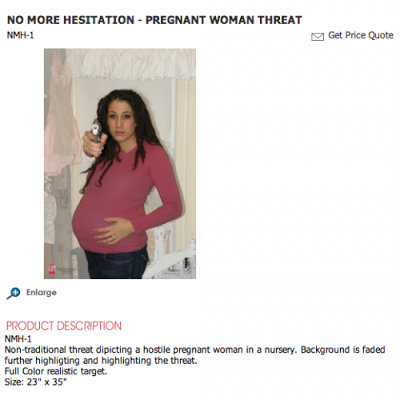 You'll notice that the target has a background that indicates that she is in her own home, not out in the "battlefield" blowing up bridges and setting up IEDs. If you get a chance to look at some of the other targets, you'll find them set in their homes.

As Infowars reports, a big customer of this target company is DHS, who a source said ordered these targets:

Following concerns that the issue could be linked with Homeland Security’s purchase of around 2 billion bullets over the last year, which many fear is linked to preparations for domestic disorder, it has now emerged that Law Enforcement Training Inc. has racked up contracts worth almost $2 million dollars with the DHS over the last three years.

The vast majority of those contracts were for “training aids” and “paperboard,” according to the USASpending.gov website, which lists numerous different contracts each in the region of $150,000 and $180,000 dollars stretching back to early 2010 and running through to July 2012.

A customer who called Law Enforcement Inc. yesterday told Infowars that the company informed him the targets were, “strictly for Department of Homeland Security and other law enforcement agencies.”


But who else would want these, unless the local SWAT teams are looking for more fresh meat? Will Grigg has a great piece that ties this outrage to the track record of "law enforcement", which has a hefty body count.

But what really, really blows my mind is that there are conservatives, who have been mentioned in the Homeland MIAC report as potential terrorists and are being used literally as target practice, who are whining about how "stupid" liberals are and how "retarded" Obama supporters are. Um, HELLO! They're just so stupid that they're planning to outgun you, and keep you talking political reality in stupid Fox News terms. Who is the dumb ones here? I think that's the big difference between so-called libertarians, which really is just awake Americans, and conservatives who are unaware of the real centers of power in this country.

As I have taken a lot of time to detail on this blog, going piece by piece through the names, companies, association, etc. we are in our 100th year of subversion by god-hating, possibly devil-worshiping weirdos. That's really the bottom line; the reality that we have to understand before any possible reform can come. Maybe I ought to troll some conservative sites and drop some truth bombs and see what happens - usually just silence.


Posted by republicanmother at 6:10 AM 2 comments:

Random Thoughts from a Person Who Thinks Too Much

I haven't had time to cohesively put together post of quality because stuff like this has been racing through my mind:

Posted by republicanmother at 9:38 PM 2 comments:

You know you need some counter to the propaganda, especially if you still own a "television machine". So here they are, speaking out loud and proud:

A father of a student at Sandy Hook laying the blame where it belongs:


Here are some guys in Western New York who have no intention of registering anything with anybody:


And here is Henson Ong who could be a voice-over actor, I think. Sometimes it takes someone from the outside to clearly see what is going on:

Well hope this cheers someone up out there.
Posted by republicanmother at 7:24 AM 4 comments: