Ok, so I was surfing around and found this well-documented article by Tony Cartalucci about Anne-Marie Slaughter, a name I remembered reading in passing in my research. But I didn't know much about her, and upon investigating, I find her worthy to make "elite" status.

It should be noted that Slaughter has sat upon the boards of Fortune 500 corporations McDonald’s and Citigroup as well as a Council on Foreign Relations board member. She is the author of a book literally titled, “A New World Order” whose catch line is “Global governance is here.” In it she argues that such governance is done through “a complex global web of government networks.” Upon examination it is obvious to anyone who looks into these “networks” that they represent the Fortune 500, answer to no one, and apply the rule of law as an arbitrary reflection of their self-serving interests subject to change upon a political whim. Despite Slaughter’s enthusiasm for a “New World Order,” in reality it is the recipe for a corporate fascist planetary regime and constitutes the greatest threat to humanity. 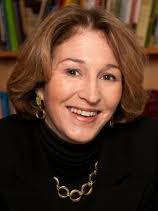 Slaughter begins a recent Atlantic article titled “The New Foreign Policy Frontier” by citing “corporations, foundations, NGOs, universities, think tanks, churches, civic groups, political activists, Facebook groups, and others” as the new frontier of foreign policy. She then goes on to state that US Secretary of State Hillary Clinton “insists that 21st century diplomacy must not only be government to government, but also government to society and society to society, in a process facilitated and legitimated by government.” Slaughter continues by saying, “that much broader concept opens the door to a do-it-yourself foreign policy, in which individuals and groups can invent and execute an idea — for good or ill — that can affect their own and other countries in ways that once only governments could.”
Slaughter goes on to use the “Arab Spring” as proof positive the new foreign policy paradigm is effective. She mentions her two days spent at the corporate-funded Personal Democracy Forum, which included bloggers and organizers from the contrived “Arab Spring.” She notes that other participants included “government officials, corporate executives, and the civic sector.” She claims the six months of unrest in the streets as a result of this “new foreign policy” has accomplished more than 30 years of traditional “foreign policy.”

Are we getting the picture? Just like ol' Norman Dodd said before he died, the first minutes of the Carnegie Foundation (1908) listed getting control of the State Department as a top priority. As we're discovering in my Wall Street and Bolshevik Revolution study, this occurred rapidly during WW1. These Foundations were the subject of the Reece Committee that Mr. Dodd was the lead investigator on and chief counsel Rene Wormser wrote the definitive book on. So we've got this woman who has written a book called A New World Order in which she envisions the government-corporate-foundation complex ruling the world. Don't like it? Doesn't sound like you've had enough public schoolin' boy, don't worry, you'll get your mind right... So here's my representation of Ms. Slaughter - some of these connections may not be current, but it shows what she's into: 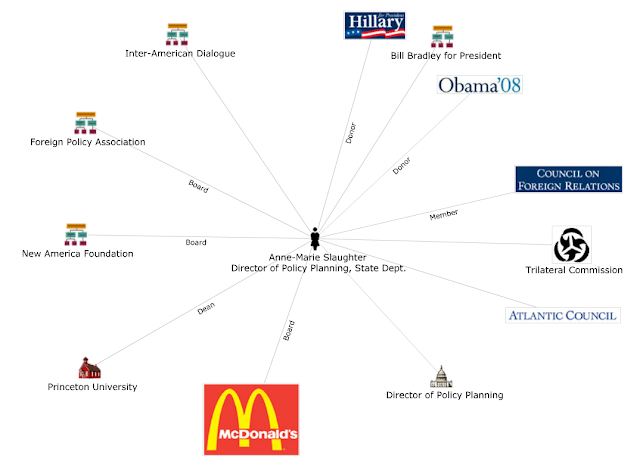 Ok, we see that she's got CFR, Trilateral and State Dept cred. She's of the liberal persuasion, but this is key: stop thinking of people as leftists or conservatives, start thinking in terms of collectivist/globalist vs. free men. Ok? Newt Gringich is just as into all this stuff as she is; he's just a different flavor to get that half of the country to go for it under the guise of "privitization" by these huge mulitnational corproations, because businesses can't be eeevill right? What if their run by collectivists, like Mrs. Slaughter who dream and actively work toward a world without national sovereignty or individual rights? We're screwed, that's what it means

But lets look at those NGOs on the left in more detail. Chances are, you've never heard of them, so lets take a look at who's funding them and what they hope to accomplish.

Inter-American Dialogue
This group consists of only 100 members chosen from the Western Hemisphere to talk about globalization. Its newest member is the Mayor of San Antonio, who probably doesn't realize what he's been asked to join. He probably thinks he just got a great club to put on his resume and doesn't think he's contributing to the problem of eroding national sovereignty. When they get done with him, it might be a different story. Let's look at the funding sources:


So we got some George Soros money here courtesy of the Open Society Institute, the Ford Foundation, where Obama's mama used to work for Timmy's daddy, Pete Geitner, the UN, and all our other globalist organizations. If you research their funding, I wouldn't be surprised to find the banksters (Citigroup, Bank of America, etc.) as corporate sponsors.


Foreign Policy Foundation
Where did this thing come from? Oh, they give us a video narrated by Tom Brokaw:

Formed from the group hanging around Woodrow Wilson, huh? Obviously people of quality. Check out my post on the Establishment here to get started understanding the Inquiry.

Their Great Decisions program is an educational program that focuses on spreading globalization. Notice how they say how non-partisan they are, that's because the push to break down our Constitution has been a bi-partisan effort. As Carrol Quigley said, the two-party system is an illusion to keep the American's people energy diverted onto the fruitless effort of "throwing bums" out only to be replaced by equally globalist bums.


New America Foundation
This organizaiton was founded in 1999 by this pretty boy Ted Halstead. Its current Board of Directors is chaired by Eric Schmidt of Google fame. A lot of flowery language over there, but its just globalism, you'll not find any hoorays for the Founders or patriotic images. There's a lot of liberal bull on their education issues page. One example is "Promoting Mental Health in Young Children via Teacher Training". They also have toolkits for the classroom. Do not think that the teacher has control of what is being taught. Basically, they're told to repeat a script out of a binder. These groups will try out new stuff in select schools. Anyway, new teachers are observed to make sure they're following the script, you see. This is how they interject the green, commie agenda into even the most conservative areas, it comes in these toolkits that are attached to grant money. Please read the free online book, The Deliberate Dumbing Down of America by former Reagan Dept. of Ed official Charlotte Iserbyt for the definitive accounting of the demise of American Education.

Getting back to Anne-Marie, this woman is just an example of what is going on. Some have estimated that there are approximately 6,000 "Insiders" who are working toward the goal of world government. If you think that you can been them by boycotting McDonalds, you're not seeing the whole picture. I hope to post in the coming weeks real solutions to undermine their evil, anti-individual plans.

Notice how she promotes "democracy" as the plays the part of the "liberal" in this Colbert Report clip. This is globalist code for them controlling things. We live in a republic, something totally different. Watch this woman and Colbert play the dialectic like a cheap violin. Let's go to  China like Nixon did, huh? Well, that started a wonderful chain of events, did it not?

The Colbert Report
Get More: Colbert Report Full Episodes,Political Humor & Satire Blog,Video Archive
Well, I know that was a lot of information, but I want to get across that everything is not as it seems. Did you think that Muslims all over just got out of bed one day and said it's a good day to revolt? We know now that Ms. Slaughter and her ilk have set things in motion so to bring order out of their controlled chaos. It may be coming to our country soon.

Cross posted at Don't Tread on Us
Posted by republicanmother at 11:29 AM

Email ThisBlogThis!Share to TwitterShare to FacebookShare to Pinterest
Labels: meet the elites