We all know that the MSM plays games with hype, but the google trends tool is an interesting way to track public interest on a topic. Now I've googled Santorum in the last few days, but it doesn't mean I'm a fan, so a high metric doesn't necessarily equal support you understand. But there is one GOP Candidate that is at least a couple of orders of magnitude above the others.Observe: 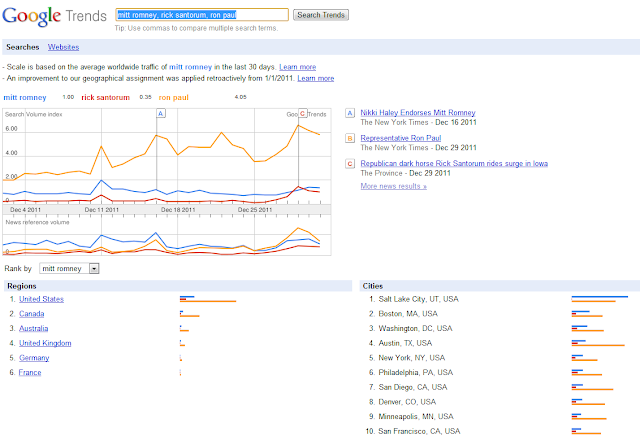 You will notice that this is for the last 30 days. The orange is Ron Paul, Mitt Romney is the blue and Santorum is the red. You will notice that the only place Mitt is out-searching Ron is Salt Lake City, which is understandable. You can see a slight bump for this past holiday weekend where the MSM (I now include Rush, Hannity and club in that) was hyping the "Santorum Surge".  Now let's go to where it really counts, Iowa: 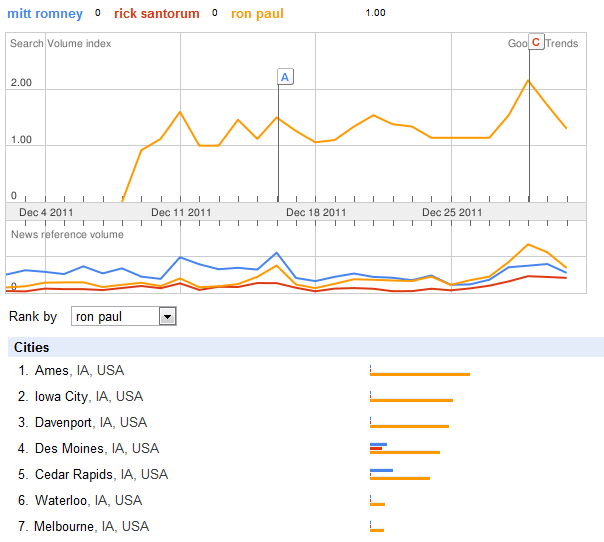 It seems like if you plan to go to a caucus, which is a lot more of an ordeal than going to a primary like I do and pushing a button, you'd be reading up on your candidate a little more. Mitt Romney and Rick didn't have enough search volume for ranking on the big graph. Looks like a few people in Des Moines are checking Rick out. hmmm, yeah..

Notice the news reference volume graph. This is the one that tracks how many mentions the search term got in Google News stories. You can see at the beginning of the month, how the MSM was pushing Mitt, now that he's not got in in their dirty little bankster bag, they've been slinging the mud on RP here lately.

Then you've got this cryptic tweet from PPP, for those who think "they" don't mess with the polls

Then you've got this bit of (bad) press on a local TV station:


Maybe it was how I was raised, but I usually look to the small things a man does to get a good measure of him.When he sees trash floating down the street does he stop to pick it up and dispose of it?Does he hold the door open for a lady?Does he say please and thank you?What kind of handshake does he have?Those types of things are what I look at. The first thought that came to my mind when I saw him "bypass" the people waiting was "who the "f" do you think you are Rick"?I know I'm not the only one out there with my personality type (although it often seems like I am the only one) and I guarantee this video will resonate with folks like me.We don't need to be pandered to or fawned after to gain our vote. Live like a decent human through your actions and we will be your most loyal supporter. Treat people as underlings and think your celebrity status means something? We will be your most fervent enemy.Respect is a two way road, and none of these men put their pants on differently than any of us. Rick Santorum should be ashamed of his actions. They speak louder than words right?So when Rick had a chance to show some decency and compassion for average Americans what did he do?There was a great article about Ron eating his breakfast all by his lonesome at an Embassy Suites a few days back. Like I said, how you act when the cameras are off and how you act in the little things in life tells more about what kind of person you are than anything else.

The thing about this MSM strategy of "surging" one of their own, Santorum is that it is rather ineffective for a caucus state. It might have more impact on a "press the button" primary, but at the caucus state, there's a lot more organization to pull it off. These prideful Elites were too busy taking everything for granted, that they didn't work on that these past four years, even forgetting to put themselves on the VA ballot.
gee whiz...

Posted by republicanmother at 2:59 PM