If Paul is Unelectable, then who the HELL Is?

You may not agree with all this, but if we don't have it out now, the liberals most surely will in a contest with Obama (or whoever they might put in his place--don't discount that possibility.) This is a great piece by Evan Mazur that just goes down the line with our GOP candidates. Here are the choice bits:

"Ron Paul is unelectable". You hear it all the time from the mainstream media and "conservative" commentators. Ron Paul says the war on drugs is unconstitutional and a failure just like the prohibition of alcohol? Unelectable! Ron Paul says that the Federal Reserve, the Communist Manifesto's central bank of the 5th plank, is a failure and should be abolished? Unelectable!

But somehow the media, the pundits, and the blowhard commentators are very reluctant to call any other Republican 'unelectable', even if the truth is staring them right in the face. If they were to expose the other candidates' hypocrisy by comparing them to the Republican Party platform that supposedly espouses Constitutionally limited government, low taxes, and low spending, it might go a little something like this:

Mitt Romney said, 'We do have tough gun laws in Massachusetts; I support them; I won't chip away at them; I believe they protect us and provide for our safety.' Mitt Romney described his political views as 'progressive'. When asked if his MA health care mandate, which made up nearly 1/3 of of the state's $1.3 billion deficit in 2009, would be a 'good model for the nation', Mitt Romney replied "well I think so", and White House records show that Romney's health care advisers went on to help craft Obamacare. ...Mitt Romney is unelectable.

Rick Santorum voted to increase the size, scope, and cost of the Department of Education by supporting the No Child Left Behind Act. Rick Santorum voted to support the Bush Medicare D drug expansion program, and I'll remind you that former U.S. Comptroller General David Walker referred to it as "the most fiscally irresponsible piece of legislation since the 1960s." During the 2008 GOP presidential nominee process, Rick Santorum stated 'If you're a conservative there really is only one place to go.. Mitt Romney'. ...Rick Santorum is unelectable.

Consider the wide support that Ron Paul is receiving from liberals and independents. I've heard some try to say this means he's a liberal too! What a joke. The man has principles that he's written tomes about. He doesn't stick his finger out and check the wind, he doesn't try to be a team player and help unconstitutional bills get passed. He's the only candidate talking about the brownshirt TSA army that has leaped from the airports, to the subways, bus stations, trains, and now at interstate weigh stations. He's the only candidate talking about your right to choose your own food and medicine. He's the only candidate that has homeschooling on his website as an issue and understands what it is (looking at you Santorum (100k, really?).  He is the only candidate on either side talking about how wasteful the drug war is. It's easier for a middle schooler to get pot than beer for a reason, it's called the black market. The facts are astounding on how failed the drug war is, but the defenders of the system will never call it out, because vast sums of money are made there and the government is tied into it according to several ex-CIA operatives. Anyway, Ron Paul has such a broad appeal that there is no way Obama could hold up to him in the general. That's why they're planning this Americans Elect Party as a back-up to split the vote for those who have been conned into voting for anyone besides Ron Paul and Obama. In fact, a guy tried to get me to sign a petition for Americans Elect in the Wal-Mart parking lot yesterday. I asked him who the petition was for and when he told me, I said no way! They're CFR! And then I ran off because I had things to do, yes I probably should have explained to him how banksters control our government's policy through a myriad of planning groups and think tanks, but I had to hurry through some errands. 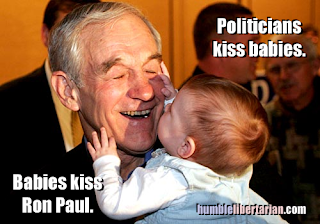 Some of you will say his foreign policy makes him unelectable. But the man sat on the Foreign Relations Committee and heard the same intelligence everyone else did. No one asserts that he is stupid. Could it possibly be that Ron Paul is giving it to us straight? Could it be that those who are tied in with the Bailout Banks who stand to make enormous sums off of military action, might actually be pushing war for a reason other than your defense? If Newt, Ricky S, or Mitt cared one bit about your security, they would have dug to the bottom of this financial situation and discovered the Fed the root cause and be clamoring for sound money too. The fastest way to control a large population like the US is not through bombing us or terrorism, it's through making our money worthless and disrupting the means by which we can eat. If Newt, Ricky S., or Mitt cared about our national security, they'd start drilling the crap out of ANWR, but that's not going to happen because their masters at the Fed, and by extension the BIS, don't want that. Are we getting the picture here?? One of these people is not like the other.

So anyway, congratulations, conservative wing of the Bankster Party, through the years of corruption, you've managed to allow the true slime to rise to the top of your barrel. Don't be so surprised when the majority of us don't find the slime to be electable.


Update: Thanks to Herman Cain Forums! for this little gem wherein Rick Santorum says he will work to discredit this new movement in the conservative party.
Posted by republicanmother at 5:58 AM