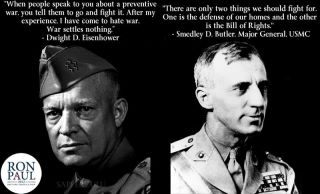 Plus a great round up of war and peace quotes from the same site, which is a pretty boss site:

“The constitution vests the power of declaring war in Congress; therefore no offensive expedition of importance can be undertaken until after they shall have deliberated upon the subject and authorized such a measure.”
~George Washington
“If Tyranny and Oppression come to this land, it will be in the guise of fighting a foreign enemy.”
~James Madison
“Governments constantly choose between telling lies and fighting wars, with the end result always being the same. One will always lead to the other.
War is an instrument entirely inefficient toward redressing wrong; and multiplies, instead of indemnifying losses.
Conquest is not in our principles. It is inconsistent with our government.
Commerce with all nations, alliance with none, should be our motto.”
~Thomas Jefferson
“When goods don’t cross borders, soldiers will.”
~Fredric Bastiat
“America does not go abroad in search of monsters to destroy. She is the well-wisher to the freedom and independence of all. “
~John Quincy Adams
“That there are men in all countries who get their living by war, and by keeping up the quarrels of Nations is as shocking as it is true…”
~Thomas Paine
“Statism needs war; a free country does not. Statism survives by looting; a free country survives by producing.”
~Ayn Rand
“All those who seek to destroy the liberties of a democratic nation ought to know that war is the surest and shortest means to accomplish it.”
~Alexis de Tocqueville
“A state of war only serves as an excuse for domestic tyranny.”
~Aleksandr Solzhenitsyn
“We Americans have no commission from God to police the world.”
~Benjamin Harrison
“If we don’t stop behaving like the British Empire, we will end up like the British Empire.”
~Pat Buchanan
“The dangerous patriot…drifts into chauvinism and exhibits blind enthusiasm for military actions….is a defender of militarism and its ideals of war and glory.”
~Colonel James A. Donovan, Marine Corps
“When people speak to you about a preventive war, you tell them to go and fight it. After my experience, I have come to hate war…..
I hate war as only a soldier who has lived it can, only as one who has seen its brutality, its futility, its stupidity.”
~Dwight D. Eisenhower
“Our country is now geared to an arms economy bred in an artificually induced psychosis of war hysteria and an incessant propaganda of fear.
Always there has been some terrible evil at home or some monstrous foreign power that was going to gobble us up if we did not blindly rally behind it.
The soldier above all others prays for peace, for he must bare the deepest wounds and scars of war.”
~General Douglas MacArthur (wonder why he was taken out of Korea???)
“People who are anxious to bring on war don’t know what they are bargaining for; they don’t see all the horrors that must accompany such an event.”
~General Stonewall Jackson
“The statesman who yields to war fever…is no longer the master of policy but the slave of unforeseeable and uncontrollable events.”
~Winston Churchill
“History teaches that war begins when governments believe the price of aggression is cheap.”
~Ronald Reagan
“It is useless to attack men who could not be controlled even if conquered, while failure would leave us in an even worse position…”
~Thucydides
“Terror is a tactic. We can not wage “war” against a tactic.”
~Ron Paul
“There is no instance of a country having benefited from prolonged warfare.”
~Sun Tzu
“Imperialism is an institution under which one nation asserts the right to seize the land or at least to control the government or resources of another people.”
~John T. Flynn
“Of all tyrannies, a tyranny exercised “for the good of its victims” may be the most oppressive.”
~C. S. Lewis
“When the tyrant has disposed of foreign enemies by conquest or treaty, and there is nothing to fear from them, then he is always stirring up some war or other, in order that the people may require a leader.”
~Plato
“It is in war that the State really comes into its own: swelling in power, in number, in pride, in absolute dominion over the economy and the society.”
~Murray Rothbard
“Washington…has become an alien city-state that rules America, and much of the rest of the world, in the way that Rome ruled the Roman Empire.”
~Richard Maybury
“History has witnessed the failure of many endeavors to impose peace by war, cooperation by coercion, unanimity by slaughtering dissidents…. A lasting order cannot be established by bayonets.”
~Ludwig von Mises
“To fight, you must be brutal and ruthless, and the spirit of ruthless brutality will enter into the very fibre of national life…”
~Woodrow Wilson (thanks a lot buddy!)
“Wars generally do not resolve the problems for which they are fought and therefore…prove ultimately futile.”
~Pope John Paul II
“War is the only game in which both sides lose.”
~Walter Scott

So there you have 2000 years of the greatest minds upon planet Earth telling us that our foreign policy is assinine, stupid, and destructive to the average person. Oh wait a minute, that's what the Elite's want! Those 100 years of public mind warping are paying off because when you confront an average neocon with all this, they'll just call you the stupid one. But generally, the American public at large is highly skeptical of the Orwellian war is peace mantra, so maybe there is some hope there.

Blessed are the peacemakers: for they shall be called the children of God.
Posted by republicanmother at 5:55 AM