This little nugget was written by
Thomas DiLorenzo
via LRC.

The freedom to do whatever you want to do – as long as you do not harm anyone else or interfere in their equal freedom – would "lead to libertinism and lead to chaos" said Sanctimonious Santorum, who has also pledged to do what he can to put an end to contraception if elected president. Contraception changes "the way things ought to be," he says. Santorum is self assured that he, and he alone, understands "the way things ought to be" and pledges to use the powers of the state to forcefully impose his "understanding"

But the founding fathers are known as champions of freedom, are they not? But what kind of freedom? According to Santorum, who apparently fancies himself as an historian, freedom in America means "the freedom to do what you ought to do – what you are properly ordered to do [by a politician like himself] – as someone living a good, decent, and ordered life" (emphasis added). "That’s the differentiation that I believe Ron Paul and I have with respect to what liberty is," said Santorum. To Rick Santorum, "freedom" means doing what government "properly" orders you to do, as long as government is controlled by good, proper, moral people like himself, the K-Street lobbyist for the Pennsylvania coal mining industry (and anyone else who will pay his huge fees for influence peddling).
This is not the view of the American founding fathers, as Santorum claims. It is more likely to have been the mindset of the founders of the Soviet Union, not the American union. It is the mindset of the neoconservatives whose founding members were, after all, Trotskyite communists. This includes the self-described "godfather" of neoconservatism, the late Irving Kristol, who reveled in talking about his youthful Trotskyite roots. 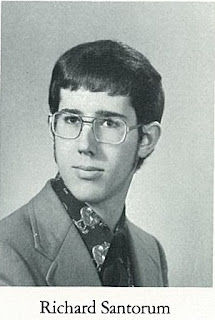 If Santorum really wanted to know how the founding fathers defined freedom he would not make up imaginary, two-century old dictionary entries but would read what the founders actually said. A good place to start would be Thomas Jefferson’s first inaugural address where he stated: "[A] wise and frugal Government, which shall restrain men from injuring one another, shall leave them otherwise free to regulate their own pursuits of industry and improvement, and shall not take from the mouth of labor the bread it has earned. This is the sum of good government . . ." It is hard to imagine that Jefferson, the author of the 1786 Virginia Statute for Religious Freedom that strongly opposed the governmental imposition of any religious views on anyone while defending religious liberty in general, would have admired an Uber-Catholic Theocrat like Santorum. For government to compel a man to support a religious cause with which he disbelieves, wrote Jefferson, is "sinful and tyrannical."

I would argue that Ricky isn't an uber-Catholic, but a political hack who'll keep pimping out his religious affiliation for as many gullible fools as possible. Am I being unjust? Not for a guy who took $100k of taxpayer money to cyber educate. That's a lot of field trips man...


When Ron Paul says that such victimless crimes as prostitution or smoking pot should be decriminalized, says Santorum, "that’s not the moral foundation of our country," once again pretending to be The Expert on the thinking of the founding fathers. There’s one problem with Santorum’s historical revisionism, however. Prostitution was in fact pervasive in Colonial America. Prostitutes traveled with George Washington’s army, serving as nurses and cooks as well as prostitutes. In fact, there were no laws in America banning prostitution until Massachusetts enacted the first one in 1917. (The 1910 "Mann Act," named after Congressman James Mann, prohibited "white slavery" for the purpose of prostitution). Federal laws against prostitution were first enacted after women got the right to vote and immediately outlawed prostitution in the vicinity of military bases when their husbands and boyfriends were off serving in the military. In other words the founding fathers agreed with Ron Paul, not Rick Santorum, on personal liberty issues.

America is "not just a collection of freedoms," said the insufferably sanctimonious Santorum. It is, instead, a collection of orders from the state defining what "proper" behavior is. Stalin himself could not have said it better.

and blogged by me with one hand while holding a sleeping baby with the other.
Posted by republicanmother at 2:26 PM