From the New American, an excellent piece that shows the differences between Dr. Paul and the rest: 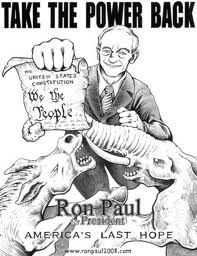 Ron Paul is an apostle of traditional American liberty. The vast majority of us are our Founding Fathers’ prodigal sons (and daughters) whom Ron Paul, at 76 years of age, continues to call home. From early on in Christian history, some of its brightest minds have sought to address “the problem of evil,” the problem of reconciling belief in an omnipotent and all-loving God with the presence of evil in the world. Usually, a resolution has been found in some variation or other of “the free will defense.” According to this line of reasoning, God could have created human beings so that they never did evil, but He preferred a creation in which humans were free, for only with free agents could He have a genuine relationship. However, the freedom to accept God’s offer of friendship inescapably entails the freedom to reject that offer. To put it another way, the freedom to do good is also the freedom to do evil.

God recognizes that there can be no virtue without freedom. Ron Paul does too.


It is precisely because of his recognition of this fact that Paul opposes all attempts to diminish individuals’ liberty for the sake of some amorphous “common good,” some supposedly moral state that the government is entrusted with bringing to fruition. More simply put, he staunchly opposes attempts to impute to the federal government the role of a parent, for if the government is a parent, then the citizen is its child.


While it isn’t obvious to many, the plain fact of the matter is that most of Paul’s fellow Republicans are no less committed to what we may, for purposes of convenience, refer to as “the Welfare State.” The “compassionate conservatism” championed by President George W. Bush and legions of other self-described “conservative” politicians and media personalities in the previous decade was just another term for “welfarism.” And though “compassionate conservatism” has fallen on hard times — no current Republican presidential aspirant would dare to characterize him- or herself in these terms — there is no denying that Republicans have abetted and continue to abet the growth of government vis-à-vis their approach to domestic policy.


There isn’t a single redistributive scheme that Republicans have sought to revoke, and plenty that they have actually initiated. But beyond the matter of “economic redistribution,” Republicans want to use the government as an agent of “character formation.” Rick Santorum is as pure an illustration of this propensity as any. From this perspective, the government must inculcate virtue in its citizens. The notion, common to Democrats and Republicans alike, that politicians generally and the President in particular are “leaders” is a function of this belief.


Of course, the article addresses a little bit of the foreign policy angle:

We needn’t dig too deeply to discover that the establishment Republican’s apparently irrational conduct toward Paul stems from his angst regarding Paul’s foreign policy vision. Paul, you see, rejects in no uncertain terms the notion that Big Government is not only permissible, but desirable, as long as it is non-American citizens abroad upon whom our government’s designs would be brought to bear. Loudly and unapologetically, he rejects the idea that “social engineering” is a good thing as long as it is other societies that our government seeks to “engineer.” Paul makes no secret of his utter contempt, a contempt born of his passion for liberty and individuality, for the belief that policies rooted in utopian fantasy are worthy of pursuit as long as it is not America, but the world, that our government seeks to perfect.

In the bizarro world we live in, the mainline conservatives will mock you for reciting what the intelligence reports from the CIA and the Rumsfeld-commissioned CPOST study say as some sort of pansy commie. When we are trillions in debt, and you start to suggest that maybe 25% of the national budget is spent on "defense" of corporate and banking cartel interests around the world the United States Government, not to be confused with America. An America, I might add who is just now starting to collectively realize that the trillions spent on "defense" toys like unmanned drones might possibly be turned on them in the event of a revolt, is going to be kicking itself for letting such a Leviathan grow so fat and dangerous.

A big part of why Republicans can't stand Ron Paul is a pride issue where they have emotionally invested themselves in failed ideas or on labeling themselves as hard-core conservatives. Everyone knows a hard-core conservative blows up bad guys. Hopefully, with the out and out Marxist in the White House, they will recognize that scenario where those in control of the "defense" of our country are in no way, necessary loyal to it at all. What if they are loyal to the coming One World Socialist Order? hmmmm?

This doesn't surprise the Christian watching and waiting, looking above. I believe very strongly that what the Bible says is coming to pass. The book of Revelation is the "blessing book" written especially for you and I who are living during these times of tumult. I believe that demonic forces are at work and have been at work in ernest for the past 100 years to bring us to this point. America is the mule, folks. Like a parasite, they've used the work ethic and ingenuity of a free country born out of the ideals of Christian liberty that Ron Paul articulates so well and have manipulated it into a poisonous, tyrannical society centrally planned and controlled. In the battle of Armageddon, there will be Lockheed and General Dynamics products used. I believe that the insane buildup of weapons is what the Enemy wants. And because of this, God ends the Book with the beating swords into plowshares comment, saying enough is enough!

I also believe that Ron Paul as President would be a fitting way to redeem our nation in God's eyes, for I truly believe he is a man after God's own heart. I know that sounds pretty corny, but I really honor his sincerity and honesty. Remember that there is a judgment of the nations coming up and I'd like for us to be able to pull out of this statism or at least be caught trying to.

"When the Son of man shall come in his glory, and all the holy angels with him, then shall he sit upon the throne of his glory: And before him shall be gathered all nations: and he shall separate them one from another, as a shepherd divideth his sheep from the goats (Matthew 25:31-32)."

Posted by republicanmother at 9:43 AM