The real truth of the matter is, as you and I know, that a financial element in the larger centers has owned the Government ever since the days of Andrew Jackson—and I am not wholly excepting the Administration of W.W.* The country is going through a repetition of Jackson's fight with the Bank of the United States—only on a far bigger and broader basis.President Franklin Delano Roosevelt to Col. Edward Mandell House, November 21, 1933, F.D.R.: His Personal Letters (New York: Duell, Sloan and Pearce 1950), p. 373.
****** 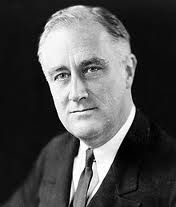 We're continuing our odyssey of discovery of the history of Wall Street. In this book, we'll be focusing on the man that Newt Gingrich wants to put on Mount Rushmore, a real hero of his. So pay attention and get your notebook out!

So let's start with some things you don't know about FDR, he was a banker and speculator in the '20s and had his office at 120 Broadway, NYC. How about that? You could say that high finance was a family tradition with him, going back to before the Founding. During the 1932 election, his campaign tried to pin Hoover as a bankster boy having chummy ties with international bankers. Back then, it was a bad thing. Of course, FDR never mentioned the gobs of money he made from working Wall Street himself. Listen in as FDR gives a speech in Columbus on August 20, 1932:

Appraising the situation in the bitter dawn of a cold morning after, what do we find? We find two thirds of American industry concentrated in a few hundred corporations and actually managed by not more than five human individuals.We find more than half of the savings of the country invested in corporate stocks and bonds, and made the sport of the American stock market.We find fewer than three dozen private banking houses, and stock selling adjuncts of commercial banks, directing the flow of American capital.

In other words, we find concentrated economic power in a few hands, the precise opposite of the individualism of which the President speaks

Hoover, the Republican, was a J. P. Morgan puppet; Smith his democratic opponent, was in the pocket of the Du Ponts, for whom J. P. Morgan & Company was the banker.         -Ferdinand Lundburg, The Rich and the Super-Rich

Why didn't the banksters stick by their boy Hoover? The answer comes in the form of the Swope Plan, named after the president of General Electric.


Because, as we shall see later, Herbert Hoover would not adopt the Swope Plan created by Gerard Swope, long-time president of General Electric. By contrast, FDR accepted the plan, and it became FDR's National Industrial Recovery Act. So while Hoover was indebted to Wall Street, FDR was much more so.

Let's step aside a moment and note that of all the volumes written on Franklin Delano Roosevelt, this is the only one that deeply delves into his career as a Wall Street financier. The "official" biographies give it a mere paragraph or so and totally gloss over the real issue. Our country's economy had recently been savaged by speculation (a contraction in the NY money supply actually) and you don't want to talk about where this FDR guy was during all that?

That's a pretty fair list of directorships. It surely earns FDR the title of Wall Streeter par excellence. Most who work on "the Street" never achieve, and probably never even dream about achieving, a record of 11 corporate directorships, two law partnerships, and the presidency of a major trade association.

In probing these directorships and their associated activities, we find that Roosevelt was a banker and a speculator, the two occupations he emphatically denounced in the 1932 Presidential election. Moreover, while banking and speculation have legitimate roles in a free society— indeed, they are essential for a sane monetary system—both can be abused. FDR's correspondence in the files deposited at the FDR Library in Hyde Park yields evidence—and evidence one reads with a heavy heart—that FDR was associated with the more unsavory elements of Wall Street banking and speculation, and one can arrive at no conclusion other than that FDR used the political arena, not the impartial market place, to make his profits.

FDR's favorite uncle, Frederick Delano, was a big-time playa in the New York banking world. Need to know how much national banks are holding in foreign securities? Uncle Fred will hook you up.


Hon. F. A. Delano
Federal Reserve Board, Washington, D.C.
December 11, 1916
My Dear Fred: Would it be possible for you to send me in strict confidence the figures obtained by the Comptroller as to holdings of foreign securities by national banks? I would be a good deal influenced in my opinion in regard the present situation if I could get hold of these figures, which would be treated with such confidence as you suggest.
If the time ever comes when you are able to slip away for a week or so for a bit of a change and rest, why not take a look at Denver and incidentally pay me a visit? There are a thousand things I would like to talk over with you.
Faithfully yours,
Benjamin Strong


Did I mention he was in the Fed? Oh wait, there's more:


Uncle Fred was down with socialist planning:

A big problem in planning is that of educating the people. If the public only realized that there can be social gains from directed effort, and that the time to accomplish most by planning comes before the need of making changes are manifested, the other problems of planning could be more easily solved.

The above brief classification of the problem involved in planning serves as a basis for indicating the need for both direct and indirect social control. Very few people really know the best use of land for their own advantage, to say nothing of planning its use for the common good. Institutions have done a great deal in educating farmers how to plan individual farms, and yet many of the farms in this country are poorly organized.

---Frederic A. Delano, What About the Year 2000? Joint Committee on Bases of Sound Land Policy, 1929
(It's past 2000 and now the feds own a third of the United States and lets the land lay fallow to catch fire. Is that what you wanted Fred?)

I'll let you read this chapter for yourself if you want to see how far back and how totally intertwined the Roosevelt family was with big banksterism. It totally boggles the mind, but there it is. I will instead conclude with this tremendous summary:

An alliance of Wall Street and political office is implicit in this Roosevelt tradition. The policies implemented by the many Roosevelts have tended toward increased state intervention into business, desirable to some business elements, and therefore the Roosevelt search for political office can fairly be viewed as a self-seeking device. The euphemism of "public service" is a cover for utilizing the police power of the state for personal ends, a thesis we must investigate. If the Roosevelt tradition had been one of uncompromising laissez-faire, of getting the state out of business rather than encouraging intervention into economic activities, then our assessment would necessarily be quite different. However, from at least Clinton Roosevelt in 1841 to Franklin D. Roosevelt, the political power accumulated by the Roosevelt clan has been used on the side of regulating business in the interests of restricting competition, encouraging monopoly, and so bleeding the consumer in the interests of a financial élite. Further, we must consider the observation conveyed by Franklin D. Roosevelt to Edward House and cited in the epigraph to this chapter, that "a financial element in the large centers has owned the government ever since the days of Andrew Jackson." Consequently, it is pertinent to conclude this introductory chapter with the 1943 observations of William Allen White, an honest editor if ever there was one, who made one of the best literary critiques on this financial establishment in the context of World War II; this, it should be noted, was after ten years of FDR and at the peak of Roosevelt's political power:


One cannot move about Washington without bumping into the fact that we are running two wars—a foreign war and a domestic one.The domestic war is in the various war boards. Every great commodity industry in this country is organized nationally and many of them, perhaps most of them are parts of great national organizations, cartels, agreements, which function on both sides of the battle front.Here in Washington every industry is interested in saving its own self. It wants to come out of the war with a whole hide and with its organization unimpaired, legally or illegally.One is surprised to find men representing great commodity trusts or agreements or syndicates planted in the various war boards. It is silly to say New Dealers run this show. It's run largely by absentee owners of amalgamated industrial wealth, men who either directly or through their employers control small minority blocks, closely organized, that manipulate the physical plants of these trusts.For the most part these managerial magnates are decent, patriotic Americans. They have great talents. If you touch them in nine relations of life out of ten they are kindly, courteous, Christian gentlemen.But in the tenth relation, where it touches their own organization, they are stark mad, ruthless, unchecked by God or man, paranoics, in fact, as evil in their design as Hitler.They are determined to come out of this war victorious for their own stockholders—which is not surprising. It is understandable also for Hitler to desire to come out of this war at any cost victorious for the German people.But this attitude of the men who control the great commodity industries, and who propose to run them according to their own judgment and their own morals, do not make a pretty picture for the welfare of the common man.These international combinations of industrial capital are fierce troglodyte animals with tremendous power and no social brains. They hover like an old silurian reptile about our decent more or less Christian civilization—like great dragons in this modern day when dragons are supposed to be dead.

Posted by republicanmother at 8:08 PM

Email ThisBlogThis!Share to TwitterShare to FacebookShare to Pinterest
Labels: wall street and FDR