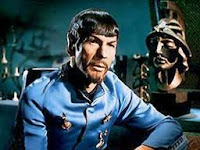 If you haven't checked out CL's great and informative post on remote control drone killing, you need to read it now. I'm providing this as a supplemental post to that so that we may better understand the players. This whole thing reminds me of a Star Trek episode. Actually, a lot of what we see today reminds me of various sci fi scenarios. But the one I'm think of today is the notorious "Bearded Spock" episode where Miss Hot Pants tells a confused Kirk he can be rid of Bearded Spock with the push of a little bitty button. Goodbye opposition, we'll be sure to tell everyone what a horrible "threat" you were so you can have the satisfaction of knowing that you were a worthy opponent.


Let's explore the manufacturer of remote control killing, Vanguard Defense Systems. I pulled some nuggets from their website:


VDI is staffed by professionals that have taken advanced UAS concepts into reality.  The Vanguard team draws on specialized experience of senior aerospace engineers, former military special operations officers, military instructor pilots as well as retired Senior Executive Service Federal Agents.  We understand and are fully committed to the protection of our warfighters and law enforcement professional and remain focused on furthering their capabilities by fielding a superior product.  Our background and operational knowledge has afforded us the unique vision to provide a platform that will extend the security and response capabilities of any organization.


So if Monsanto finds you have their patented genes in your field because the wind blew that way, will they contract with Vanguard to burn your field remotely or just blow up the farmhouse?

Hello public-private partnership, the PC term for fascism in America:


In partnership with the Space Alliance Technology Outreach Program (SATOP), VDI is also leveraging the best and brightest NASA engineers and scientists to bring a quality product to our clients.

Here's some news articles from their very own site. I put a teensy weensy bit of emphasis.

10/11/11:
Vanguard Defense Industries announced today that they have joined the United States Special Operations Command’s official Business Partner Network (BPN).  As a BPN member, Vanguard interacts with and supports a variety of companies which provide ongoing goods and service support to the United States military via the Special Operations Command.  The network includes the following capabilities and interest areas; Aviation Systems, Advanced Unmanned Aircraft, C4, Biometrics, Cyberspace Operations, Mobility, Weapons and Electronic Attack, Medical, Irregular Warfare and Power and Energy.  “We are proud to be members of this network and are pleased that our product and help advance the capabilities of our warfighter on a global scale” stated Michael Buscher, Chief Executive Officer of Vanguard Defense Industries.

August 26, 2011
A 22-year-old man was charged with computer offenses by U.K. police investigating attacks on companies carried out by the hacking group “Anonymous”.  Peter David Gibson, a student from Hartlepool, England, was charged with a conspiracy to impair the operation of a computer or hinder access to a program or data, the Metropolitan Police in London said today in a statement. Gibson had been arrested along with five others by officers in connection with hacking activity, the police said. On  August 15, 2011, Vanguard Defense Industries management learned of an attempted “Hack” against corporate servers made by the group known as “Anonymous”.  Although the corporate servers were not breached, the private Gmail account of Senior Vice President Richard Garcia was accessed and his personal emails were made public by “Anonymous” splinter group “AntiSec”.  Since that time, Vanguard has been working in close cooperation with the Federal Bureau of Investigation as well as Interpol’s Cyber Crime Centre to bring all members of “Anonymous” and “AntiSec” to justice.  In a statement today, Vanguard’s CEO Michael Buscher stated, “We are very pleased over the news of the arrests and look forward to more members of this group being brought to justice by any means possible.”


Who is Michael Buscher?

June 2010 – Present (1 year 6 months)
CEO for the leader in rotary-wing Unmanned Aerial Vehicles (UAV). Leads the design, development and deployment of UAVs to the military, local, state and federal agencies as well as to the commercial sector.

Didn't see Oathkeepers, did you???

Who is Richard Garcia?

November 2010 – Present (1 year 1 month)
Vanguard Defense Industries (VDI) is a Texas based aviation & aerospace firm specializing in the design, development and delivery of the ShadowHawk, a Vertical Takeoff and Landing (VTOL) Unmanned Aircraft Systems (UAS). Specialize in the sale of the ShadowHawk for Commercial, Law Enforcement and Military applications. Go to the VDI website for additional details.

Yeah, this is quick paste-up job, but you know how it goes with us busy moms...
Posted by republicanmother at 2:37 PM