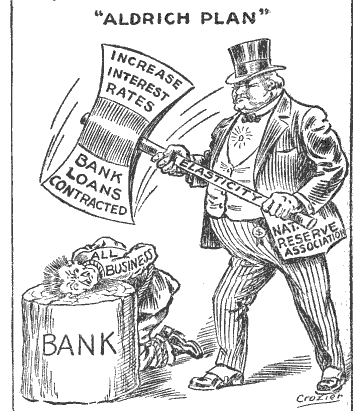 The guy on the chopping block represents the credit unions, small banks, and small businessmen who aren't plugged into the cartel. Your big box stores, Big Agra, Big Pharma, Big Insurance, Big Bailout Banks, Big Oil, etc are part of the "Nat. Reserve Association" in that they have their business intertwined with the Federal Reserve Banking Cartel, giving them an inside track on party the small businessman doesn't get invited to. Special interest rates, no-bid contracts from a organization that can print its own money and use its military to clear out the trash for you. This is what Gen. Butler said was going on back in the '90s, the 1890s that is.Think about how the lobbyist organization, like say, I dunno. The National Restaurant Association, formerly headed by "outsider to Washington politics" Herman Cain, works to gain government influence for its clients. Who are its clients? One that comes to mind is the Darden Restaurant Company owner of Red Lobster, The Olive Garden, etc. that got the Obamacare waiver. All of these "too big to fail" businesses will get waivers while Granny's diner will be penalized. It's all on purpose to do what Rowan Gaither told the Reece Committee those 60 years ago:

"We operate here under directives which emanate from the White House...The substance of the directives under which we operate is that we shalluse our grant making power to alter life in the United States such thatwe can comfortably be merged with the Soviet Union."

Of course he was talking about the Ford Foundation's operations to undermine traditional American morality, individualism, and everything that's right about our country and turn it into what Norman Dodd said was "communism with American efficiency". And isn't that what we really have here?


With their five million dollars as a war chest, the Aldrich Plan propagandists waged a no-holds barred war against their opposition. Andrew Frame testified before the House Banking and Currency Committee of the American Bankers Association. He represented a group of Western bankers who opposed the Aldrich Plan:

CHAIRMAN CARTER GLASS: "Why didn’t the Western bankers make themselves heard when the American Bankers Association gave its unqualified and, we are assured, unanimous approval of the scheme proposed by the National Monetary Commission?"
ANDREW FRAME: "I’m glad you called my attention to that. When that monetary bill was given to the country, it was but a few days previous to the meeting of the American Bankers Association in New Orleans in 1911. There was not one banker in a hundred who had read that bill. We had twelve addresses in favor of it. General Hamby of Austin, Texas, wrote a letter to President Watts asking for a hearing against the bill. He did not get a very courteous answer. I refused to vote on it, and a great many other bankers did likewise."
MR. BULKLEY: "Do you mean that no member of the Association could be heard in opposition to the bill?"
ANDREW FRAME: "They throttled all argument."
MR. KINDRED: "But the report was given out that it was practically unanimous."
ANDREW FRAME: "The bill had already been prepared by Senator Aldrich and presented to the executive council of the American Bankers Association in May, 1911. As a member of that council, I received a copy the day before they acted upon it. When the bill came in at New Orleans, the bankers of the United States had not read it."
MR. KINDRED: "Did the presiding officer simply rule out those who wanted to discuss it negatively?"
ANDREW FRAME: "They would not allow anyone on the program who was not in favor of the bill."
CHAIRMAN GLASS: "What significance has the fact that at the next annual meeting of the American Bankers Association held at Detroit in 1912, the Association did not reiterate its endorsement of the plan of the National Monetary Commission, known as the Aldrich scheme?"
ANDREW FRAME: "It did not reiterate the endorsement for the simple fact that the backers of the Aldrich Plan knew that the Association would not endorse it. We were ready for them, but they did not bring it up."

Andrew Frame exposed the collusion which in 1911 procured an endorsement of the Aldrich Plan from the American Bankers Association but which in 1912 did not even dare to repeat its endorsement, for fear of an honest and open discussion of the merits of the plan.
Chairman Glass then called as witness one of the ten most powerful bankers in the United States, George Blumenthal, partner of the international banking house of Lazard Freres and brother-in-law of Eugene Meyer, Jr. Carter Glass effusively welcomed Blumenthal, stating that "Senator O’Gorman of New York was kind enough to suggest your name to us." A year later, O’Gorman prevented a Senate Committee from asking his master, Paul Warburg, any embarrassing questions before approving his nomination as the first Governor of the Federal Reserve Board.
George Blumenthal stated, "Since 1893 my firm of Lazard Freres has been foremost in importations and exportations of gold and has thereby come into contact with everybody who had anything to do with it."
Congressman Taylor asked, "Have you a statement there as to the part you have had in the importation of gold into the United States?" Taylor asked this because the Panic of 1893 is known to economists as a classic example of a money panic caused by gold movements.
"No," replied George Blumenthal, "I have nothing at all on that, because it is not bearing on the question."
A banker from Philadelphia, Leslie Shaw, dissented with other witnesses at these hearings, criticizing the much vaunted "decentralization" of the System. He said, "Under the Aldrich Plan the bankers are to have local associations and district associations, and when you have a local organization, the centered control is assured. Suppose we have a local association in Indianapolis; can you not name the three men who will dominate that association? And then can you not name the one man everywhere else. When you have hooked the banks together, they can have the biggest influence of anything in this country, with the exception of the newspapers."


Well, we know that these same players bought up the newspapers in short order. That network of control is like the Borg collective today, and its gone global for a long time now. The only holdouts were Qaddafi, N. Korea,  and the Iranians.  Are you getting the picture? These people don't give a hang about you, me, or any individual nation's well-being, including Israel. They just look for how they can manipulate people, emotions, and groups to get what they want. Central Banking is the epitome of the "root of all evil".
Posted by republicanmother at 2:10 PM