So if you read Drudge, you've already heard something about Herman and some sort of harassment scandal while he was a lobbyist for the National Restaurant Association. I know, just when you thought you've heard all about Herman, you go and find out he was a lobbyist. It just keeps getting better. This calls for a bulleted list to get our minds around this guy:

Look out Obama, there's a new narcissist in town! Seriously, you've got some serious humility issues when you come out with a book that looks like this: 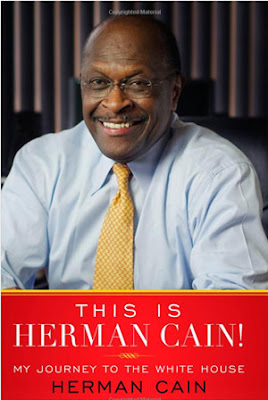 Herman is the sole beneficiary to his own little shell company, creating some major conflicts of interest, reports the Daily Mail article:

This news may present legal issues for the presidential candidate, since he is the man that would be profit from this payment to his company.
He and his campaign are not worried, however, and a spokesperson said that they even ran the decision by a campaign lawyer before doing so and he concurred.
'If they know Herman Cain, they wouldn't even make such an assertion,' Mr Cain said in response to the issue.  'How's that for political correctness!'


According to a massive class action lawsuit against Aquila’s board of directors – including Cain – he allegedly steered employees into heavily investing their retirement savings in company stock, while at the same time shifting their business model from straightforward energy generation to risky energy trading – the kind of corporate greed that infamously brought down Enron, Mother Jones reports. In the suit, it claims that Cain and other top officials violated a 37-year-old federal law that requires employers to responsibly manage the retirement programs for their employees. Their pensions and life savings were lost.

OH Please, oh please give me an "outsider" who totally agrees with the Establishment on everything. That will change our nation for the better!!
Posted by republicanmother at 10:35 AM