This just in from the Lulzington Post, Herman Cain has captured the love and respect of the world's greatest Pokemaster, Ash Ketchum. 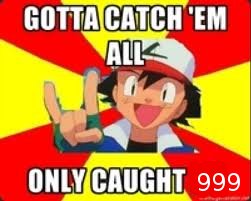 In a huge press conference outside of his humble home (where he still lives with his mother and father figure Mr. Mime), Ash made a riveting speech explaining his endorsement.

Cain: "The cost of Poke-balls is too damn high!"

"He wants to be the very best, like no one ever was," he began to a cheering crowd. "To enter the race was his real test, to win it is his cause." Concluding, he shook the Hermanator's hand and shouted: "Soon, the voters will understand, the power that's inside! I choose you, Herman Cain!"

The roaring of the crowd represents a huge shift in the Pokemon League's political paradigm. As of late, they had been supporting Mitt Romney based on his recently uncovered massive Pokemon card collection, containing "upwards of 3,000 holographic cards, most of which had writing implying that they had been traded from little children in the late nineties", said AP spokesman Ronald Garner.


The shift to Cain, however, represents Cain's new economic policy: a choice of 9 of each of the starting Pokemon at the beginning of your travels instead of just one. This gives people in the league a much greater chance of picking their "match", because Cain's "9-9-9" plan gives players the choice of 9 Bulbasaurs, 9 Charmanders, or 9 Squirtles, each with their own personality. It also comes off of the heels of Cain's endorsement of Pokemon the Movie 2000:

You see, Herman is a great fan of the title theme to the movie, Pokemon 2000 sung by Donna Summers. He said in the Fox debate that it was great poetry:


Maybe he'd been watching too much Pokemon with the grandkids, but I would remark that the great poets worth quoting are Yeats, Emerson, Milton, etc. I know what you're thinking, that's not fair! Honey, the only fair around here happens in September.

Posted by republicanmother at 12:25 PM