Quote of the Day

Single acts of tyranny may be ascribed to the accidental opinion of a day; but a series of oppressions, begun at a distinguished period, and pursued unalterably through every change of ministers, too plainly prove a deliberate, systematical plan of reducing a people to slavery.

--Thomas Jefferson, Notes on British America, 1774
Consider the last 60 years of presidential elections, from an old WND article:
In 1952 and 1958, Adlai Stevenson and Dwight Eisenhower were members of the Council on Foreign Relations.
In 1960, both John F. Kennedy and Richard M. Nixon were members.
In 1964, President Lyndon B. Johnson was not a member. Neither was his opponent, Barry Goldwater. But Johnson had already staffed his administration with plenty of insiders.
In 1968, it was Nixon versus club member Hubert H. Humphrey.
In 1972, it was Nixon again against Democratic Party CFR member George McGovern.
In 1976, it was CFR Republican Gerald Ford losing to CFR Democrat Jimmy Carter.
In 1980, Ronald Reagan was not a member, but his running mate, George H.W. Bush, was. So were both of his opponents – Carter and independent John Anderson. Assuming office, however, Reagan quickly named 313 CFR members to his team.
In 1984, another CFR member, Walter Mondale, was nominated by the Democratic Party to challenge Reagan.
In 1988, CFR member Bush took on CFR member Michael Dukakis.
In 1992, Bush was challenged by an obscure governor from Arkansas, Bill Clinton, who won the "trifecta" by being a member of the CFR, Trlateral Commission and Bilderberg Group. He was also a Rhodes scholar – another favored credential of the worldwide elite.
In 1996, Clinton was challenged by CFR member Bob Dole.
In 2000, CFR member Al Gore ran against non-member George W. Bush, but his running mate, Dick Cheney, was.
In 2004, Bush was challenged by CFR member John Kerry.
Not sure about 2008 candidates, but know that Obama's administration is chock full of CFR members. 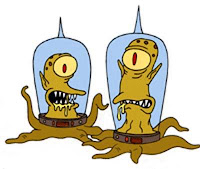 I'm working on a map of CFR, it's going to take awhile as there are over 1000 nodes to deal with. I think it will be very enlightening. CFR members are more heavily concentrated in the State, Treasury and Defense departments and infest the federal reserve system. It's becoming more apparent to me that our country is actually controlled by a few hundred people, many of which are unelected, who have absolute disdain for the American way of life.

Go ahead, throw your vote away!
Posted by republicanmother at 2:39 PM