Continuing our journey through the subversion process, we come to how the everyday health of citizens can be a tool to take down a country. Again, here is Yuri Bezmenov, ex-KGB agent who specialized in propoganda enlightening us (written circa 1982):

Very similar methods are being used in the area of medical and health services and sports, (as part of an activity meant to keep the population healthy). By encouraging 'professionalism' in spectator sports rather than encouraging individual sports participation, America enfeebles herself as a nation. Most American adults who 'love sports' watch TV sports programs, while munching pretzels with their beer, and NOT taking physical participation in sports activity. Unlike in the USSR, sports is not a COMPULSORY part of elementary education in America. Impressive victories of Soviet athletes at international competitions further facilitate the IDEAS OF THE SUPREMACY of SOCIALISM in the area of public health, thus convincing more and more Americans of the need to emulate the Soviet system and introduce it into the American schools.

How true is that! I really can 't add more to that, except to say that back in the 1950s, PE class was an everyday thing in high school, not the one semester of required health that is now commonplace. Isn't it ironic that the social planners who are probably responsible for the dramatic cutbacks in PE (cuts into indoctrination time), are now saying kids need to get more active.

What many Americans do not realize, is that what they see on their TV screens is not REAL Soviet sport. The majority of the USSR population is not 'athletic' at all; they are sick from the lack of correct nutrition and alcoholism. Soviet athletes are state-created exceptions to the general national deterioration in the USSR.
A similar myth is being promoted in the U.S. about 'free health care' in the USSR. While working in Moscow, accompanying numerous foreign delegations and showing them 'regular' medical facilities in clinics and kolkhos hospitals, my guests did not all realize that I was taking them to specially prepared 'exclusive' medical establishments, 'only for the eyes of foreigners.’ When I arranged interviews with Soviet doctors, telling my guests about the 'glorious achievements' of Soviet surgery, some of them had no way of checking if these 'achievements' were available to USSR collective farmers or workers in Siberia. They are not. And many Americans know about this, although they have never visited my old country. Yet the tendency of U.S. bureaucrats is to enlarge the state-run medicare, despite the fact that, as shown in the USSR and elsewhere, socialized medicine is sub-standard, less efficient, and most definitely less progressive than privately owned and operated medical facilities within a properly functioning free market system.

In high school, I read Alexander Solzhenitsyn's Cancer Ward. That book will explain to you why health care is an oxymoron in a socialistic system.  It's more like controlled "death care".

Demoralization in the area of food CONSUMPTION patterns is also effective in the introduction of such things as 'junk foods.’ No, KGB agents do not put chemicals into American food and drink. It is done by some American mega-monopolies who operate along the same principles as Soviet 'Obshchepit' (Public Food Service): they look at consumers as 'units of consumers,’ not individuals. Abolishing freely competing SMALL food companies, who HAD TO TREAT YOU INDIVIDUALLY to survive economically, these giants of indigestion artificially CREATE consumers' tastes and demands which may not be in the interests of your health but surely in the interests of the monopoly profit. And here I tend to agree, at least in part, with America's Ralph Naders, and consumer protection groups, although I do not share their ideas on the solution of the problem.

The fact that over half (51%) of American food is being imported is a great cause for alarm. We have the land and resources to be able to feed ourselves. There is no reason for this unless you deliberately want America not be self-sustainable. The fact that a lot of the food that is produced in the US is owned by mega-corporations like Archer Daniels Midland, ConAgra, and Monsanto should also give one pause. When anything is centralized by human hands, you know that it will not end well. I'm not a health food nut, but the expanding size of my family has caused me to cut down on the junk food. We're all better off for it. Remember to eat to live, not live to eat. So is there a conspiracy to control us all with food? You will find those in both political camps who claim evidence to that fact.  I've mapped below a few of the biggest ag companies, probably left out some key ones, but pay attention to who is on the board at these companies: 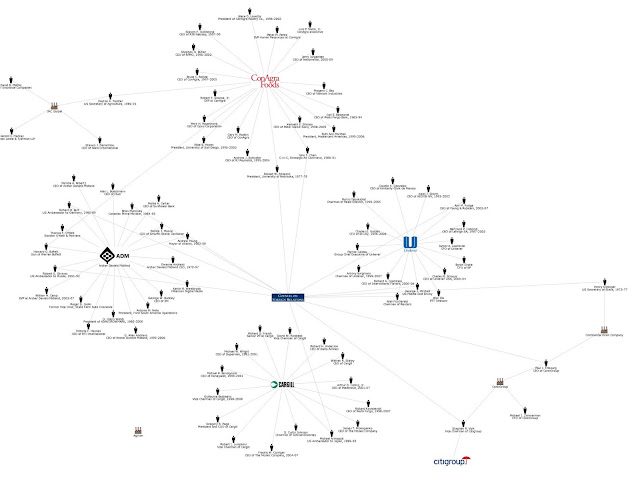 double click to enlarge. I put the obligatory CFR on there because they have people on the board of everything. To explore this map further, click here.


So what is up with making America a more unhealthy nation? The goal is enfeebled masses who are too lazy, apathetic, and depressed to take action or resist the coming tyranny. The one thing I think Yuri would have added had he written this today would be the advent of psychotropic drugs handed out like candy. In the book of Revelation, it talks of there being sorcery in the end times. Everyone, until recently, just brushed that aside as figurative. But the greek word that sorcery is translated from is pharmakeia, where we get our word pharmacy. World Net Daily had an article awhile back explaining how 99% of those committing crazed mass shootings (Columbine, Virginia Tech, Andrea Yates, etc.) were on these psych drugs. Apparantly the biggest danger is when you just go on or off the medication. Couple that with the fact that millions of American children are subjected to controlled substances like Ritalin and Stratera. I have not researched the origins of medicating children outside of mental institutions, but I'm sure it would be revealing. I would not be surprised if certain universities and social planners came up in the process. Oh, and by the way, if a kid can play a video game for hours on end, they don't have ADD.

All quotes from Yuri Bezmenov are taken from his pamphlet, "Love Letter to America" via Useless Dissident.
Posted by republicanmother at 10:17 AM