Let's just look at what is already on file with regard to martial law here in the United States.
The first plan in recent memory is Operation Garden Plot. Under the Freedom of Information Act, the 1978 version has recently been released. You may find it here and peruse.

Frank Morales, who has more analysis of Operation Garden Plot here says its purpose is:


The elite military/corporate sponsors of Garden Plot have their reasons for civil disturbance contingency planning. Lets' call it the paranoia of the thief. Their rationale is simple: self-preservation. Fostering severe and targeted "austerity", massive inequality and unbridled greed, while shifting more and more billions to the generals and the rich, the de-regulated "entities of force" and their interlocking corporate directors know quite well what their policies are engendering, namely, a growing resistance. Consequently, they are systematically organizing to protect their interests, their profits, and their criminal conspiracies. To this end, they are rapidly consolidating an infrastructure of repression designed to "suppress rebellion" against their "authority". Or more conveniently put, to suppress "rebellion against the authority of the United States." And so, as the Pentagon Incorporated increases its imperialist violence around the world, the chickens have indeed come home to roost here in America in the form of a national security doctrine obsessed with domestic "insurgency" and the need to pre-emptively neutralize it. Its' code-name: "Garden Plot".

Operation Garden Plot was used during 9/11 and during the 1992 race riots in Los Angeles. Homeland Security is now in charge of these contingency plans and implementation.

I'm going to link to an Infowars article, because I want you to pay attention to a link in it. Why don't I just link it myself? Well, when I read the pdf, it said you can't link without specific permission, and you can't reproduce the document in pdf form without written authorization. I'm like, gee, maybe I don't want to get on their list right away. But check out any of the links to the RAND corporation policy papers. You see, our legislators aren't actually bothered to write our laws. Did you ever stop to think that the sheer size and volume of legislation coming out Washington DC could not be produced by the few hundred Congressmen and Senators we have? Legislation comes out of these think tanks and non-profit foundations, the lawmakers just sign their names. Remember Pelosi saying we have to pass the bill in order to find out what is in it?

So what is the RAND corporation and why are they paying people to figure out plans to control civil unrest in the US. If you follow the link to the document I glanced at, you'll see that it was published in 2009 under a contract for the  U.S. Army’s Peacekeeping and Stability Operations Institute. It is entitled, "A Stability Police Force for the United States".  At the beginning of the conclusion section, the report says that foreign troops may be an option for shoring up a Stability Police Force. The report is written as though it's referring to overseas missions.  If you were to ask, I'm sure that's what they'd say. But the National Guard has been doing some suspicious maneuvers in Illinois with the Polish Army, in New York, under the auspices of drug crime enforcement, and we have 7000 Marines going to Costa Rica with 42 warships and no one knows why.  I thought Obama was going to cut down on the military, but it seems to be ramping up to something.

So what is the RAND corporation and who's in it? It stands for Research and Development and grew out of Douglas Aircraft advising the government. Currently, half of its research is military-related. They also research social policy as well. You probably guessed I made a map of RAND - it's just too much fun not to - explore this map for yourself here. 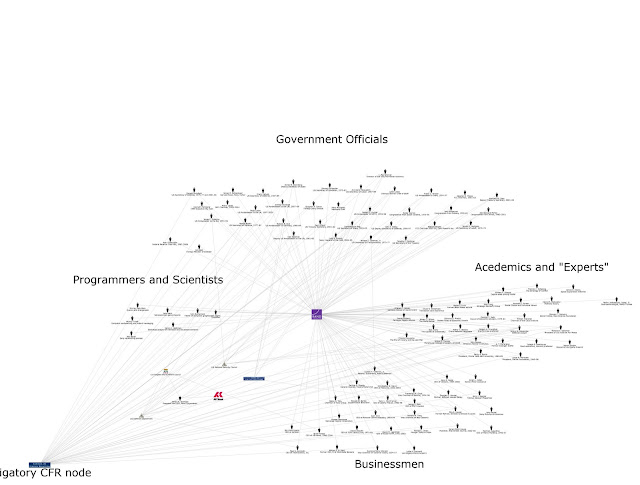 click to enlarge, but may need to use link above.

Other thoughts, the only people in this country that don't have unregistered guns are the criminals. If they do come after gun owners, they've already got all your info. All I've got to say is Oathkeepers is a great idea.
Posted by republicanmother at 3:25 PM