The Carlyle Group - Many, many conflicts of interest

In my explorations of the NNDB mapper toy, I came across this one company again and again. So I decided to map it out and see who was in this company. It was an impressive list of people. So what is the Carlyle Group and why is it full of the upper crust of Washington DC?

The Carlyle Group is a private buy-out investment firm that specializes in defense. They have made the news recently by announcing that they would buy out NBTY Inc., the producers of all those cheap vitamins at Walmart and Target. You might want to stock up. There is a movement afoot to curtail the natural health industry. It's called the Codex Alimentarius, the plan to ban the free market exchange of natural health products - learn more here.

The big pharma stamping out natural remedy competition warrents a whole other post, so I'm keeping this one focued on the Carlyle Group. I could write a dissertation about this firm, but instead, I'll just roll this educational filmstrip entitled The Iron Triangle:Carlyle Exposed - Warning -the first couple of minutes are in Dutch - so just fast forward that part:


Of course, I've made a Carlyle Group map which you can play with here.

Other famous names include:
former president George Bush Sr, who status with the group is acknowledged but yet disavowed.
John Major - former UK Prime Minister
George Soros - you know its a quality operation with this guy on the team!

Note that there are three members of the Trilateral Commission, whichi is significant seeing how comparatively small this company is and how relatively few Trilaterals there are. Also a significant number of CFR in the Carlyle Group. You can't just sign up to be in the Trilateral Commission or in the Council on Foreign Relations, you have to be invited by one of their gang members first. It's not like the Rotary club.

Here's the Frank Carlucci map that shows that being a government official pays big time. 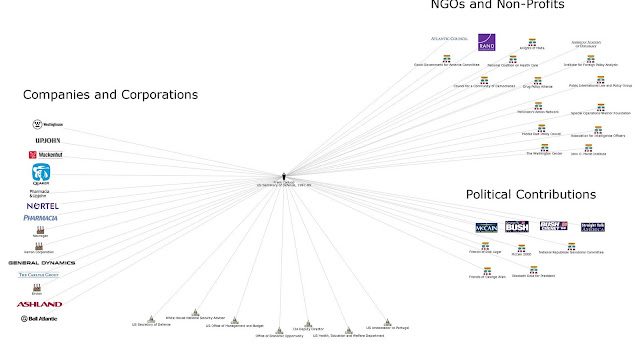 Posted by republicanmother at 12:15 PM