Yuri again was prophetic in what was to be our future. Remember he wrote this over 25 years ago:


Marxist-Leninist ideology coated in various indigenous “social theories” have greatly contributed to the process of American family break-up. The trend recently is changing in the opposite direction, but many generations of Americans, brought up in broken families, are already adults lacking one of the most vital qualities for the survival of a nation-- LOYALTY. A child who has not learned to be loyal to his family will hardly make a loyal citizen. Such child may grow into adult who is loyal to the State though. The USSR example is rather revealing in this case. In the struggle for the 'final victory of Communism,’ the goal of the subverter is to substitute, as slowly and painlessly as possible, the concept of loyalty for NATION with loyalty to the “Big Brother” welfare state, who gives everything and is able to TAKE everything, including personal freedom-- from every citizen. If that objective is successfully achieved, the subverter does not need any nuclear warheads and tanks and may not even need the physical military INVASION. All that will be needed is to 'elect' a 'progressive thinking' president who will be voted to power by Americans, who have been addicted to welfare and 'security' as defined by Soviet subverters.

Mission accomplished, collectivists. Much can be written about the phenomenon of the dissolution of the family. If you have read through the Deliberate Dumbing Down (provided for free in the sidebar), you already know that the breakup of the family was maniacally planned by psychologists, sociologists, and educators on the payroll of the tax-exempt foundations. The combination of currency manipulation and the mass psychology of the women's lib movement pushed women out into the workforce. The reality is that about one third of all women have always worked from the dawn of time, although much of that was cottage industries. Women in the workforce did not affect wages until they began to outnumber the men who were retiring. When the supply of the workers increased, the wages naturally decrease. This benefits the government as they now have more people to tax and more children separated from their parents for longer periods of time.

Why does separating children from their working parents benefit the government? Because when kids are not allowed to develop attachments to their families, they do not develop a sense of loyalty. Why do you think the liberals are always pushing government-run day care and pre-k? It's to get the kids indoctrinated earlier. This sort of thing would not have been possible in an agrarian society, but with industrialization, the industrialists began looking at human beings as cogs in their money-making machines. This is evident when you look at the projects their foundations have sponsored.

Here is Aaron Russo, who you may think is a bit out there. I'm not really sure what to think anymore, except that the Lord is coming for His Bride real soon!
Anyway, Mr. Russo was friends wtih Nicholas Rockefeller and relates a conversation he had with him. I don't know if it's really true, but I can't find where the Rockefellers rebutted these accusations. But what he says sure makes a lot of things add up. It never made sense to me that the majority of American women, in a relatively short span of time, would just willingly embark on the two-income lifestyle like a bunch of lemmings, leaving their kids to fend for themselves.


This picture would seem to prove that they did know each other: 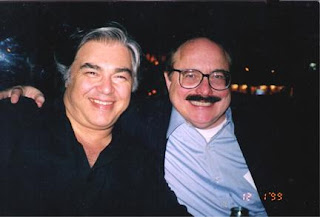 Yuri Bezmenov quotations are from the booklet, "Love Letter to America" found courtesy of Useless Dissident.
Posted by republicanmother at 11:54 AM