Up next in our excursion into subversion, is the manipulation of racial and ethnic politics for the purpose of the old divide and conquer routine. Here again, our host Yuri Bezmenov tells us how this technique was used and brutally implemented in communist Russia.

Racial and ethnic interrelations is one of the most vulnerable areas for demoralization. There is not a single Communist country where racial groups are 'equal' and enjoy as much freedom to develop themselves culturally and economically as in America. Actually, there are not too many “capitalist” countries where ethnic minorities have it as good as in the USA. I have been to many countries of the world and I can state to you, my dear Americans, that your society is the least discriminatory. The Communist 'solution' for racial problem is 'final': they simply murder those who are different AND stubbornly insist on remaining different. Stalin played with whole populations of 'ethnics'-- 'resettling' Estonians, Latvians and Lithuanians in Siberia, relocating Crimean Tartars from the tropics to permafrost and Koreans from the Far East to the Kazakhstan deserts. But unfortunately, an 'average' American never recalls these commonly known facts when his attention is drawn to domestic 'racial discrimination' issues by those who profess 'racial harmony' along the socialist principle guidelines. Why? Simple: because American 'race discrimination fighters' NEVER MENTION these facts. If the USA were located on a separate planet from the Communists, I would probably agree with Martin Luther King when he said that “America is a racist country.’ But when these statements are made on THIS planet and in THE MOST INTEGRATED NATION IN THE WORLD, I say to your 'fighters for racial equality': you are hypocrites and instruments (even if unwilling) of DEMORALIZATION.

The American traditional solution of racial and ethnic problems is slow but efficient: the 'melting pot' which raises the less developed groups to a HIGHER level. It has worked for more than a century of American history and created the most harmonious and productive nation on Earth. The present day 'solution' to racial inequality is borrowed from Communist mythology: EQUALITY of all racial and ethnic groups LEGISLATED by the government and ENFORCED by state bureaucracies. We know perfectly well that neither races nor INDIVIDUALS are equal, in every respect. We know that every nation and race has its peculiar character, abilities, traditions, mentality, and ability to learn and its individual PACE OF DEVELOPMENT. By mimicking the Soviet 'national policy' of equality America simply erases the distinct racial characteristics that have made this country great.

The false cry of racism is a non-issue. Remember, we studied non-issues a while back. For every non-issue there is an equal and opposite issue. If racism is not the issue, what is? Division, and hopefully a little resentment and even anger will be ginned up. Liberals wait with their fingers crossed wishing that someone will be angry enough to do something crazy. That would make the perfect pretext for some more heavy-handed legislation. 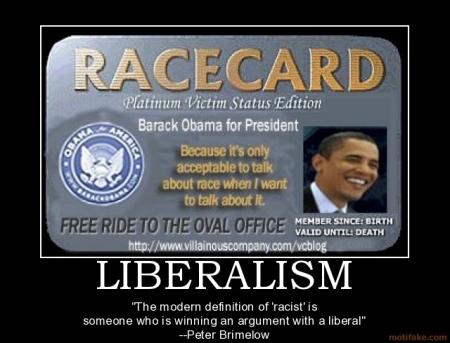 The race card is getting pretty worn and tattered, and those of us who don't play with it can easily identify when it's being held and played.  I think most Americans are getting pretty sick of it. Yuri makes a great point that America is exceptional among the countries of the world for our racial tolerance. The blacks of this country have been mistreated and continue to be mistreated.  I support reparations for blacks, not for slavery, but because they have been the targets of social engineering. Those responsible have deep enough pockets to provide those reparations. It is not any mistake that the black family has been destroyed. I know for a fact that the government welfare officials target black churches to promote the latest "program". This is done after a "disbandment ceremony" as not to affect the 501(c). I could start a whole 'nother blog that did nothing but detail how this group has been experimented upon, used and abused. Instead I'll link to the trailer of what must be an awesome documentary, called Maafsa 21; I saw this at Mommylife.

Check out the Maafsa 21 link on my roll under X-files, and click on podcast. There you will find a Living in Black Radio interview with the producer of this documentary. Guess what? The people who funded and orchestrated the progressive agenda in the early 20th century are also mentioned as accomplices in reducing the black population.

Currently, I think Yuri would comment that the New Black Panthers and the DoJ's blind eye regarding their doings fits perfectly into the plan of causing division. I think it's a testament to how tolerant America really is that they have to go to this level to try to keep the racial rhetoric in the media.
Posted by republicanmother at 1:08 PM