Demoralization of Everyday Life - Population/Land Use

As Dale Peterson famously pointed out, family farmers are losing their farms. Meanwhile, the federal government owns more land than ever before. 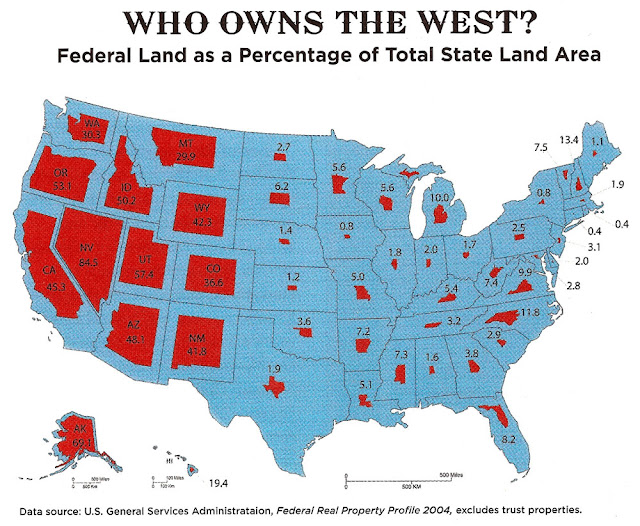 Note that our Senator Majority Leader, Harry Reid is from Nevada, which looks to be nearly totally owned be the feds.

Also consider that when you cannot grow your own food, you a have a degree of dependence on those who produce foodstuff. 1920 was the first year that more people lived in cities than in the country. Keep in mind, too, that many of our cities have tougher gun laws than the rest of the country. NYC Mayor Michael Bloomburg came up with the Mayors Against Guns Program, which would not target illegal guns (how can you target things on the black market anyway?) but make more hoops for law-abiding gun owners to jump through.

Yuri makes the point that controlling where people live has a lot to do with mass psychology:


Very briefly on population distribution: urbanization and “de-landization” (the taking away of private land) is the greatest threat to American nationhood. Why? Because the poor farmer often is a greater PATRIOT than an affluent dweller of a large congested American city. Communists know this very well. The Soviets keep a very tight control over the size of their cities by the system of 'police registration of residence' called 'propiska.’ They know perfectly well that the farmer will fight an invader until last bullet ON HIS LAND. “Underprivileged” or urbanized masses on the other hand, may feel like meeting an invader with flowers and red banners. ALIENATION of people from privately-owned land is one of the very important methods of DEMORALIZATION.

If writing this today, I think Yuri would definately bring up how the federal government is attempting to control water usage in the Western states in order to deliberately drive private farmers out of business through the Clean Water Restoration Act .  He might even say that the intercontinental highway system may be designed to isolate certain segments of the population. If you've ever traveled on pre-intersate highways, you've seen the abandoned towns and businesses by the wayside. Changing the infrastructure of our country will also change our land use.

All Yuri Bezmenov quotes come from his pamphlet, "Love Letter to America" via Useless Dissident.
Posted by republicanmother at 10:28 AM

Email ThisBlogThis!Share to TwitterShare to FacebookShare to Pinterest
Labels: blogging Bezmenov, land use