First and foremost, it’s a kingdom issue, and, second, it’s a moral issue, “We have hundreds of thousands of Hispanic Southern Baptists and many of them are undocumented. … It’s no secret that we practice aggressive evangelism. Many of these people were converted after they got here.”

Newsflash, Dr. Land, national sovereignty is important to God.  There are a lot of dry passages in the Old Testament where He painstakingly describes the boundaries of the Promised Land as well as each tribe's portion. It's great that we're reaching Hispanics for Christ, but that doesn't mean that our established law no longer applies. He then goes on to equivocate in the article that Hispanics will turn out to be easier to Americanize.

“Realistically, I think it is probably more politically feasible to do this because the overwhelming majority of the people that we’re talking about come from a European civilization,” said Land. “It would be more problematic if we had 12 [million] to 14 million undocumented people and they were either Oriental or Islamic. … Whether that is right or wrong, I’m just giving you a realistic political calculation.”


And hath made of one blood all nations of men for to dwell on all the face of the earth, and hath determined the times before appointed, and the bounds of their habitation;

Mexico is a dangerous place these days and the Gospel is more easily accepted by those under hardship. I would like less political calculation out of SBC leaders, and more consideration of the times in which we live. Forces are at work to disintegrate national sovereignty by making borders meaningless. This lines up with what the Bible prophesies as the One World Government. Why such an education theologian as Richard Land can't see that is beyond me. For anyone interested, I have an End-Times Scriptures tab at the top with a special intro by Sir Isaac Newton himself. I also have on the left roll, Unveiling the End Times in Our Times by Dr. Adrian Rogers, most of it is free on Google Books.

So anyone want to take three guesses as to what other organization Dr. Richard Land belongs to? Check it out below the fold. 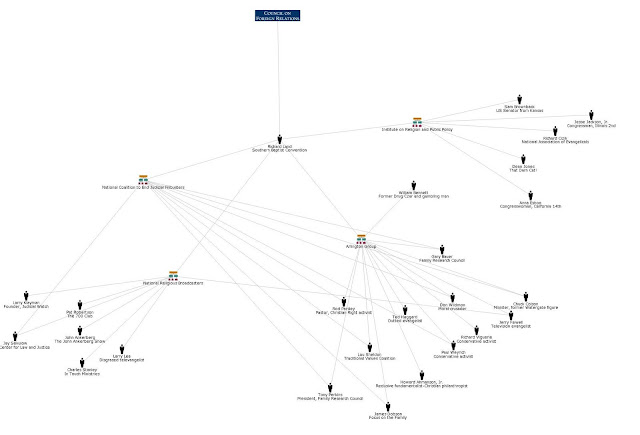 Check it out here - Yes, that's the Council on Foreign Relations. I'm not looking for them, they've just got people everywhere!

Be ye not unequally yoked together with unbelievers: for what fellowship hath righteousness with unrighteousness? and what communion hath light with darkness? And what concord hath Christ with Belial? or what part hath he that believeth with an infidel?   - II Corinthians 6:14-15

Posted by republicanmother at 10:12 AM