In case you missed a part of my series blogging Yuri Bezmenov's Love Letter to America, I have for your convenience a listing of those posts along with visual aids!
First, the Subversion Chart, an outline of our study: 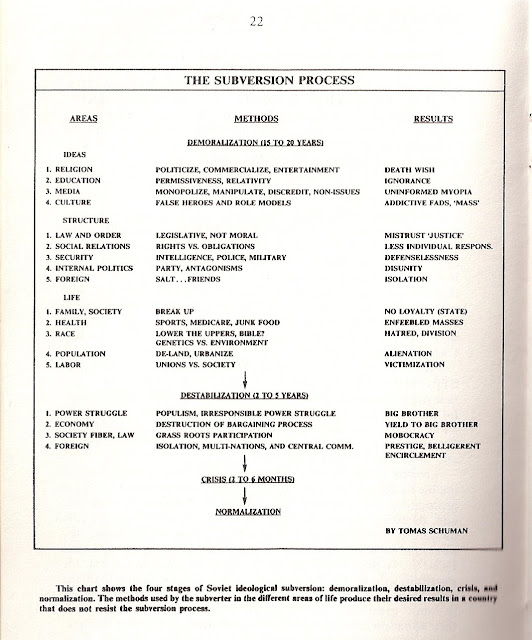 Here is the famous interview with G. Edward Griffin, where Yuri explains how he implemented subversion as a propaganda expert in the KGB:


I can't get full-length Google Vid to embed, so here is the link in case you want to watch it like a movie.


Here is a more in-depth lecture by Mr. Bezmenov at UCLA. The last part is the best part!

Remember that even though the Soviet Union is gone, the principle of subversion remains, along with the financial powers that backed the Soviet Union to begin with. Remember what Rowan Gaither of the Ford Foundation told the Reece Committee:


"We operate here under directives which emanate from the White House...
The substance of the directives under which we operate is that we shall
use our grant making power to alter life in the United States such that
we can comfortably be merged with the Soviet Union."

With the collapse of the dollar, can you not see how it could be arranged that the one-world government as predicted in the Bible will become necessary to maintain order? The point of this post is showing how the infiltration of a country is an almost scientific operation, carried out in a series of steps. The whole point of demoralization, as Yuri says is to get your target nation so confused so that the population cannot come to a rational conclusion about anything. Do your own diligence to try to cut through all the propaganda you're being fed. Don't ever say something is too far out there to be investigated. If you tried to explain to a child how our country is 14 trillion dollars in debt and the government won't stop spending, they'd say, "no way! that's too far out there!"

Here's another great quote to get you thinking from the only man who was ever allowed to read the minutes of the first CFR meetings, Carroll Quigley:

In 1891, [Cecile] Rhodes organized a secret society with members in a "Circle of Initiates" and an outer circle known as the "Association of Helpers" later organized as the Round Table organization. In 1909-1913, they organized semi-secret groups known as Round Table Groups in the chief British dependencies and the United States. In 1919, they founded the Royal Institute of International Affairs. Similar Institutes of International Affairs were established in the chief British dominions and the United States where it is known as the Council on Foreign Relations. After 1925, the Institute of Pacific Relations was set up in twelve Pacific area countries. They were constantly harping on the lessons to be learned from the failure of the American Revolution and the success of the Canadian federation of 1867 and hoped to federate the various parts of the empire and then confederate the whole with the United Kingdom. ... There does exist and has existed for a generation, an international Anglophile network which operates to some extent in the way the Radical Right believes the Communists act. In fact, this network, which we may identify as the Round Table Groups, has no aversion to cooperating with the Communists, or any other groups, and frequently does so. I know of the operations of this network because I have studied it for twenty years and was permitted for two years, in the early 1960s, to examine its papers and secret records. I have no aversion to it or to most of its aims and have, for much of my life, been close to it and to many of its instruments. I have objected, both in the past and recently, to a few of its policies but in general my chief difference of opinion is that it wishes to remain unknown, and I believe its role in history is significant enough to be known.

Posted by republicanmother at 3:48 PM