In the 2007/8 presidential election, Walter Williams was named as a possible VP pick by his friend, Ron Paul. In the Washington Times, Williams had this to say:


Mr. Williams’ own ‘08 favorite is Rep. Ron Paul, Texas Republican and a 1988 Libertarian Party presidential nominee, who last month announced the formation of an exploratory committee.
“If the framers of the Constitution were somehow to come back, Ron Paul is one of possibly only three people in Congress that they’d even talk to,” said Mr. Williams, adding that most politicians have a “generalized contempt” for the values of the Constitution.

I loved it when Walter would sit in for Rush, I felt like I was actually getting a chance to learn something new. I wonder how Rush feels about this? Imagine for a minute, Walter Williams doing VP press conferences.....
wow. That was a nice thought experiment, wasn't it?

I actually would get a kick out of Walter saying how he was going to get his wife a new vacuum, anything to make her life easier. The man gets it. What would I do with jewelry, but watch my toddler flush it down the toilet at the last minute? But a shop vac could be useful for when one of them puts dish soap in the dishwasher causing a sea of bubbles. Walter is in touch with real life. Unless my husband gets me a maid, I appreciate things that make my life easier, and I appreciate a dude that isn't into keeping up with the Jones' and is all about making his home a better place to live. If his wife is like me, she'd be pissed at him spending money on frivolity anyway. 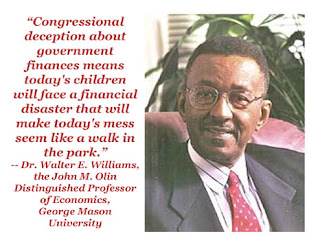 Posted by republicanmother at 7:15 AM