In this chapter, our host Dr. Sutton makes a note of the fact that so many of the characters discussed thus far had office space in the Equitable Building located at 120 Broadway, New York City:

In any event, the building at 120 Broadway was in 1917 known as the Equitable Life Building. A large building, although by no means the largest office building in New York City, it occupies a one-block area at Broadway and Pine, and has thirty-four floors. The Bankers Club was located on the thirty-fourth floor. The tenant list in 1917 in effect reflected American involvement in the Bolshevik Revolution and its aftermath. For example, the headquarters of the No. 2 District of the Federal Reserve System — the New York area — by far the most important of the Federal Reserve districts, was located at 120 Broadway. The offices of several individual directors of the Federal Reserve Bank of New York and, most important, the American International Corporation were also at 120 Broadway. By way of contrast, Ludwig Martens, appointed by the Soviets as the first Bolshevik "ambassador" to the United States and head of the Soviet Bureau, was in 1917 the vice president of Weinberg & Posner — and also had offices at 120 Broadway.

Is this concentration an accident? Does the geographical contiguity have any significance? Before attempting to suggest an answer, we have to switch our frame of reference and abandon the left-right spectrum of political analysis.

Dr. Sutton goes on to quote Carroll Quigley, often lampooned by those with a shallow understanding of these matters. Whatever one's opinion, Dr. Quigley was the official historian of the Council on Foreign Relations and had access to primary-level information.


"More than fifty years ago the Morgan firm decided to infiltrate the Left-wing political movements in the United States. This was relatively easy to do, since these groups were starved for funds and eager for a voice to reach the people. Wall Street supplied both. The purpose was not to destroy, dominate or take over..."

Professor Quigley's comment, apparently based on confidential documentation, has all the ingredients of an historical bombshell if it can be supported. We suggest that the Morgan firm infiltrated not only the domestic left, as noted by Quigley, but also the foreign left — that is, the Bolshevik movement and the Third International. Even further, through friends in the U.S. State Department, Morgan and allied financial interests, particularly the Rockefeller family, have exerted a powerful influence on U.S.-Russian relations from World War I to the present.


So what we are establishing here is that the banksters of Wall Street are running socialism and communism in foreign lands and not just here in America. We also learn the the supposed independent agency of the Fed was closely intertwined with other corporations, namely American International Corporation.

American International Corporation (AIC) was founded in 1915 with the mission of expanding American interests abroad. They had conquered America and were searching for greener field to harvest. The first investors in this new corporation was a who's who list of the richest men in America. One could argue that AIC was the first multinational corporation. They quickly established offices all over the world. With the formation and rapid growth of this corporation, we begin to see the embryo of the modern world's mess.

For instance, AIC was heavily invested in the United Fruit Company, which fomented a lot of "banana republic" revolutions in 1920s Central America. Was this a foreshadowing of the CIA-instigated wars of the latter 20th century?


This is what Gen. Smedley Butler was talking about when he said that War was a Racket. Only with the limitless capabilities of the printing press and the fear-mongering of the next great enemy were these monsters able to create a perpetual war machine.

Firms located at, or near, 120 Broadway: 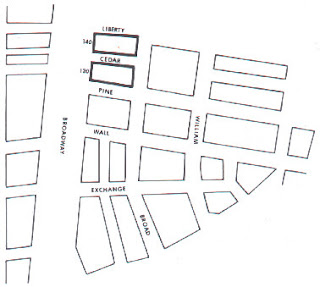 Now get this, our Secretary of State, Robert Lansing goes to the AIC to get policy advice about what to do with the new Bolshevik government in Russia. William Franklin Sands, the secretary of AIC sends back a letter in Feb. of 1918, before the Bolsheviks had cemented their hold on Russia and while the Greens and White armies were still vying for control.

Go back to chapter one if you still believe that Wall Street epitomizes capitalism and is the mortal enemy of communism. History shows us that neither is true.

This Sands fellow is one of the first modern examples of someone stuck on the revolving door of power. Prior to being an executive at AIC, he was a diplomat and had deep ties at the State Department. He left diplomacy to work on foreign loans and was part of that Red Cross mission discussed a few chapters ago.

In early 1918 Sands became the known and intended recipient of certain Russian "secret treaties." If the State Department files are to be believed, it appears that Sands was also a courier, and that he had some prior access to official documents — prior, that is, to U.S. government officials. On January 14, 1918, just two days before Sands wrote his memo on policy towards the Bolsheviks, Secretary Lansing caused the following cable to be sent in Green Cipher to the American legation in Stockholm: "Important official papers for Sands to bring here were left at Legation. Have you forwarded them? Lansing." The reply of January 16 from Morris in Stockholm reads: "Your 460 January 14, 5 pm. Said documents forwarded Department in pouch number 34 on December 28th." To these documents is attached another memo, signed "BM" (Basil Miles, an associate of Sands): "Mr. Phillips. They failed to give Sands 1st installment of secret treaties wh. [which] he brought from Petrograd to Stockholm."

Private citizens getting official government cables on Green Cipher encryption. We find out later that Sands asked Treasury Secretary McAdoo for a special economic commission on Russia and since they didn't have foreign aid like we do today, the Wall Street banks jumped in. In fact, they salivated over the possibilities  of having access to the natural resources of such a large area as Russia combined with a Marxist government to gather all that loot into one easy exploitable government. In the end, a private commission was sent out made up mostly of companies with office space at 120 Broadway called the American-Russian Industrial Syndicate

This guy wrote the book, Ten Days that Shook the World, a glowing review of the Bolshevik Revolution with a special forward by Mr. Lenin himself. He was a contributor to the socialist magazine, Masses as well as the more famous magazine, Metropolitan. The long and short on this guy is that he was paid by the banksters, particularly interlocked with Guranty Trust, a corporation that shows up a lot. It was for Metropolitan, Mr. Reed covered the Pancho Villa uprising, which as you will remember, was a bankster-funded operation. However, John Reed didn't always toe the party line writing once:

"At the Throat of the Republic" (Masses, July 1916), traced the relationship between munitions industries, the national security-preparedness lobby, the interlocking directorates of the Morgan-Rockefeller interest, "and showed that they dominated both the preparedness societies and the newly formed American International Corporation, organized for the exploitation of backward countries.

So there you go, if you want to understand the dramatic shift in America's foreign policy at this point in time, Mr. Reed just told you whats going on.

In 1915, Mr. Reed gets arrested in Russia, but because he runs with the big boys, gets out. Again and again, if you read this chapter in its entirety, you see that the US State Department, American International Corporation, and Mr. Reed are very tight and work together as a well-oiled machine. John Reed wrote communist propaganda, yet he was paid by Wall Street money. I'll let Anthony Sutton sum it up:

This paradoxical account on intervention in behalf of a Soviet agent can have several explanations. One hypothesis that fits other evidence concerning Wall Street and the Bolshevik Revolution is that John Reed was in effect an agent of the Morgan interests — perhaps only half aware of his double role — that his anticapitalist writing maintained the valuable myth that all capitalists are in perpetual warfare with all socialist revolutionaries. Carroll Quigley, as we have already noted, reported that the Morgan interests financially supported domestic revolutionary organizations and anticapitalist writings. And we have presented in this chapter irrefutable documentary evidence that the Morgan interests were also effecting control of a Soviet agent, interceding on his behalf and, more important, generally intervening in behalf of Soviet interests with the U.S. government. These activities centered at a single address: 120 Broadway, New York City.

So is 120 Broadway a portal to hell? Many of those with office space there gave loads of money and propaganda assistance to what would become Communist HQ. Love of money was their motive, but would they have done it all over again with the knowledge that Communism would lead to the deaths of millions of lives? In future installments of this series, I hope to discover the banksters reactions to the horrors of central planning. However, I have an inkling..


"Whatever the price of the Chinese Revolution, it has obviously succeeded not only in producing more efficient and dedicated administration, but also in fostering high morale and community of purpose. The social experiment in China under Chairman Mao's leadership is one of the most important and successful in human history."

He made this statement after Mao murdered 60 million people!


Wall Street and the Bolshevik Revolution by Dr. Anthony Sutton can be read in its entirety at Reformed Theology.
Posted by republicanmother at 12:00 AM