The Bolsheviks Return to New York


Who is Alexander Nyberg?

He was a Finnish immigrant whose alias was Santeri Nuorteva that followed a man named Albert Williams back to New York City from Russia for the purpose of setting up  Soviet/Bolshevik diplomatic relations and/or propaganda campaigns. He was the first Soviet operative to work within the United States for these purposes, Mr. Williams having failed. When the State Dept. wanted to talk to him about what and whom he knew, he showed up with some heavy-duty counsel:


Nyberg was accompanied by H. Kellogg, described as "an American citizen, graduate of Harvard," and, more surprisingly, by a Mr. McFarland, an attorney for the Hearst organization.

Nyberg wasn't too successful in his task either, however, he did not escape the notice of a young J. Edgar Hoover who noted him in a letter to US Committee on Foreign Affairs.

What do you know about the Soviet Bureau?
Probably nothing, but hold on to your hat as you see what happens next as the hapless Nyberg is replaced by Mr. Martens and the Soviet Bereau:

Alexander Nyberg (Nuorteva) was then let go and replaced by the Soviet Bureau, which was established in early 1919 in the World Tower Building, 110 West 40 Street, New York City. The bureau was headed by a German citizen, Ludwig C. A. K. Martens, who is usually billed as the first ambassador of the Soviet Union in the United States, and who, up to that time, had been vice president of Weinberg & Posner, an engineering firm located at 120 Broadway, New York City. Why the "ambassador" and his offices were located in New York rather than in Washington, D.C. was not explained; it does suggest that trade rather than diplomacy was its primary objective. In any event, the bureau promptly issued a call lot Russian trade with the United States. Industry had collapsed and Russia direly needed machinery, railway goods, clothing, chemicals, drugs — indeed, everything utilized by a modern civilization. In exchange the Soviets offered gold and raw materials. The Soviet Bureau then proceeded to arrange contracts with American firms, ignoring the facts of the embargo and nonrecognition. At the same time it was providing financial support for the emerging Communist Party U.S.A

Remember the address 120 Broadway, NYC, as we'll learn later on how this is really the location of a portal to hell. Anyhow, please note that this "ambassador" is located  in the same town as Morgan and Co. This Soviet Bureau is their little bankster operation and they like having it conveniently in the same town, not in Washington DC. Also note the old feudalistic system set up here, the raw product is exported and the finished product imported. Good luck being self-sufficient and competitive with that arrangement. Our host Dr. Sutton has written a scholarly work, Western Technology and Soviet Economic Development 1945 to 1965 that details how the Soviets were able to function in the modern world and it wouldn't have been possible without Wall Street. Oh, and isn't it icing on the cake that the "Red Menace" was also being funded by the banksters?


But wait, our country wasn't so far gone in 1919 that the Soviet Bureau didn't find themselves open for business but just 3-4 months as the Lusk Committee raided their office and took a look at who'd been weaving webs there. They found that the Guarantee Trust Company was all over the place  along with over 1,000 other American firms. As this information was in control of the state department, it was shared with the British and here is part their summary (watch for names you'll recognize!) 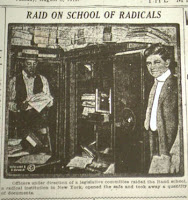 1) There was an intrigue afoot about the time the President first went to France to get the Administration to use Nuorteva as an intermediary with the Russian Soviet Government, with a view to bring about its recognition by America. Endeavour was made to bring Colonel House into it, and there is a long and interesting letter to Frederick C. Howe, on whose support and sympathy Nuorteva appeared to rely. There are other records connecting Howe with Martens and Nuorteva.

(2) There is a file of correspondence with Eugene Debs.

(3) A letter from Amos Pinchot to William Kent of the U.S. Tariff Commission in an envelope addressed to Senator Lenroot, introduces Evans Clark "now in the Bureau of the Russian Soviet Republic." "He wants to talk to you about the recognition of Kolchak and the raising of the blockade, etc."

(4) A report to Felix Frankfurter, dated 27th May, 1919 speaks of the virulent campaign vilifying the Russian Government.

Frankfurter would later become one of FDR's supreme court appointments known for progressiveness.

[Martens'] organization is a powerful weapon for supporting the Bolshevik cause in the United States and... he is in close touch with the promoters of political unrest throughout the whole American continent.


This guy Marens was working with leftists to get the Marxist-Communist-Bolshevik propaganda going within their circles working with leaders like John Reed, Ludwig Lore, and Harry J. Boland.

The British Report mentioned Julius Hammer, but he Lusk Committee made no mention of him:


In Julius Hammer, Martens has a real Bolshevik and ardent Left Wing adherent, who came not long ago from Russia. He was one of the organizers of the Left Wing movement in New York, and speaks at meetings on the same platform with such Left Wing leaders as Reed, Hourwich, Lore and Larkin.

One should note that Julius' dad, Jacob was a native of Russia and still had family there. Julius also supported the budding Communist Party USA both financially and managerially. But in 1920, he got sent to Sing Sing for doing an abortion resulting in a fatality for the the mother. Vladimir Lenin suggested that this was a false charge to punish him for pushing communism. He did his 3 and 1/2 years while other communist party members were also jailed on sedition charges or deported to Mother Russia. His son was Armand Hammer, executive of Church and Dwight, makers of Arm and Hammer baking soda, haha. Armand was also a bigwig in Occidental Petroleum, the corporation that made Al Gore, Sr. a wealthy man. It's interesting to note that Armand made a lot of money exporting pharmaceuticals to Red Russia during the '20s and stayed heavily involved in Russian relations for the rest of his life, getting doctors to help out with Chernobyl. At the same time:


Politically, Hammer was a staunch supporter of the Republican party. He boosted Richard Nixon's presidential campaign with $54,000 in campaign contributions. He plead guilty on charges that one of these donations had been made illegally and received probation and a $3000 fine, but was later pardoned by Republican U.S. President George H. W. Bush.

But I thought Republicans of the '70s and '80s were against communism? That's why we had to build up our military, right? Because the communists had nuclear weapons. But what we have here is a man of the world who has spent a lot of time in Russia without interference from the CIA or FBI, and at the same time giving money and having some influence with the inner circle of American politics. They don't just give pardons away if they don't know who you are.

This makes more sense if you understand who was behind Nixon and Bush was also the same entity behind funding communism. Everyone knows that these two presidents were "Rockefeller Men" and as we progress in our study, we'll see that the Rockefellers have been instrumental towards moving us to a world socialist system.

Kenneth Durant, Treasurer
He was an officer in the Soviet Bureau and a former aide to everyone's favorite collectivist, Col. House. When the Soviet Bureau was shut down when Martens was deported in 1921, Durant continued the work under the auspices of the Soviet Tass.

Before Martens was deported, he was deposed in a Senate hearing. He admitted that most of his work in the Soviet Bureau had to do with getting big businesses and manufacturers to invest in Russia despite the lack of formal diplomatic relations, not running around trying to make America communist, although that was in the works. A captive market intrigued hundreds of the biggest firms, but when asked by the New York Times (back when it actually practiced journalism) they totally denied it. But in the Lusk Committee files, their names, particularly, Swift & Co. were found.

While all this was going on in the USA, the Bolsheviks were still fighting in Russia and American troops were over there on the opposite side of the Reds. Meanwhile, the money was being funneled fast and furious, one might say, by the banksters out of Russia from rubles to sterling. Those sitting on Wall Street were reading all about it their papers in the peace of their executive suites, while the profit projections resulting from the captive economy of Russia lay on their desks.

Now don't go Pavlov-dog on me and freak out because I used the word profit negatively in a sentence. These people had already amassed enough wealth to be comfortable, and were not reinvesting it in America for new technologies, but were instead exchanging it for power that would be international in scope. Like a mountain climber trying to scale ever-higher peaks, these guys are addicted to power/money like crackheads. The love of money IS the root of all evil, as we shall find out...

Wall Street and the Bolshevik Revolution by Dr. Anthony Sutton is available in its entirety at Reformed Theology.

Posted by republicanmother at 8:05 AM