Rev. Chuck Baldwin, a man so patriotic that he has earned the Southern Poverty Law Center's number 1 spot on their enemies list, recently wrote a column that really struck a chord with me. Before I got involved in researching deep politics, I was really, really into investigating where the church got off the rails. It started over 150 years ago with those dirty, rotten Unitarians, but that's another post.

In his column, Pastor Baldwin points out how most of our nation's pastors are more afraid of the IRS than the holy and righteous God. He also points out how the church's tax-exempt status has been used to silence activism and dissent on the part of churches. Unless, of course, you belong to a church that is promoting a worldview that will subvert Western Civ. Baldwin points out the lack of courage to stand for truth is our ultimate undoing. He poses the question, where did it all start?


The rejection of truth seems ubiquitous in America today. When did it start? Maybe when Abraham Lincoln turned the Constitution on its head and--at bayonet point--turned republicanism into nationalism; maybe when Woodrow Wilson rejected thousands of years of human history and turned America’s sound money system over to the corrupt and illegitimate Federal Reserve; maybe when Wilson created the monstrous Internal Revenue Service; maybe when the 17th Amendment was adopted; maybe when the American media convinced people that Lee Harvey Oswald acted alone in the assassination of President John F. Kennedy; maybe when the American people (including the vast majority of pastors and Christians) turned their backs (and their hearts) to the Branch Davidians, who were murdered by federal agents outside Waco, Texas; maybe when so-called “conservative” Senate Republicans deliberately chose to cover up President Bill Clinton’s criminal conduct; maybe when the powers that be began demonizing anyone who dared to question the “official” story regarding the events on 9/11/01; maybe when a vast majority of Christians and conservatives blindly followed and actively supported the unconstitutional, un-American policies of President George W. Bush. They supported Bush when he threw off Western Civilization’s time-tested Just War doctrine (and replaced it with an unconscionable Preemptive War policy), and, again, when he officially began turning America into a police state by creating the Department of Homeland Security, implementing the Military Commissions Act, introducing the Patriot Act, and dismantling Habeus Corpus and Posse Comitatus. Whenever it started, the sad reality is, America has largely become a nation of truth-rejecters.

The key verse that summarizes this theme is given:

There is a passage of Scripture that I simply must interject here: “Because they received not the love of the truth . . . God shall send them strong delusion, that they should believe a lie.” (II Thess. 2:10,11 KJV)

This is one of God’s universal principles: when people deliberately reject truth, God will allow them to believe lies, which always leads to ultimate destruction. I submit that is exactly where America is today. As a nation, we have rejected truth, and God is giving us over to deceit and falsehood. And what is interesting to me is the way in which many unbelievers seem to have a thirst for truth that far surpasses that of many professing Christians. This leads to an amazing paradox.

Think of it: when God is moving within a nation with His plan of truth and justice (which He is always doing), then it stands to reason that the evil one is, likewise, resisting and countering God’s plan through deceit and falsehood. This means that those unbelievers who seek truth are allying themselves with God (maybe even unwittingly), while those professing Christians who have rejected truth are allying themselves against God (again, maybe even unwittingly). Remember, God called the heathen king, Cyrus, “my shepherd.” (Isa. 44:28) But one thing is constant: truth is like a magnet: one is always being pulled toward it or away from it, depending upon the polarity of one’s heart and mind. People who embrace truth tend to embrace it further, while people who reject truth tend to be continually hardened against it.

It does seem like a motley crue of characters that are being drawn into the freedom movement. You'll find an odd assortment of athiests, hard-core Christians, and all sorts in between pointing out that many things are not right in our country and world. The more research we all do, the more details we're finding out, such as names, hidden agendas revealed through foundation minutes, money trails, and other evidence that demands an accounting. Of course the absolute Truth of the Word is going to be mocked in this hell-bound world, but one would hope that we can "reason together" on the tangible facts that available to us. They are a witness to the fact that there are indeed evil forces working in our world. Just take a gander at what the elite bigwigs in our multinational corporations, political world, and media do for kicks out in California: 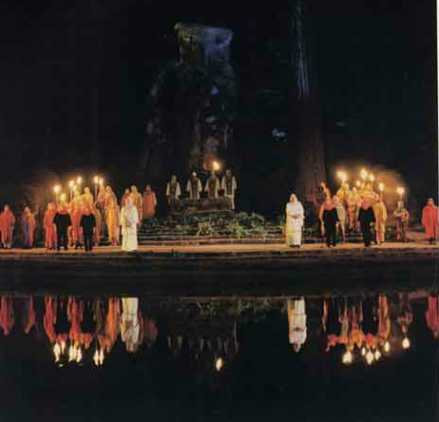 What? You mean you don't go camping once a year to burn a body in effigy in front of a forty foot owl idol? It's just good ol' boys havin' some fun! Psst... want their names? click here.  I'll post on this later - I promise.

So if you ever thought our leaders who always seem to be able to throw out the name of The Way, The Truth and the Life when running for office actually believe what they say..I say to you hah! Rev. Baldwin sums it all up:

And ye shall know the truth, and the truth shall make you free.  -John 8:32

Note #1: Tyranny and lies go together.
Note #2: We've been living under a soft tyranny for at least 97 years.
Note #3: During that time, everything the government has told us is a lie. (including war justification, cigarettes are safe, the food pyramid, etc.)

As a Christian, uncovering lies and pointing out the truth is a form of witnessing. If you claim the Absolute Truth of God's Word, but have not the courage to stand up and call a lie a lie and injustice for what it is, what does that say about your integrity to an unbelieving world? Christians should be taking the lead in exposing the evil in our world, not sticking their heads in the sand.
Posted by republicanmother at 9:28 AM