Wherein, the Romney campaign practices EPIC FAIL in trying to gain evangelical votes. Here is the sum of it from Doug Wead, who seems to be taking the role of reporter regarding the Ron Paul campaign due to the media blackout:

The John McCain, eh sorry, the Mitt Romney campaign replayed a scene from past failed Republican candidates yesterday.  They announced in the morning that Governor Romney would be the commencement speaker at Liberty University in Lynchburg, Virginia.  The school founded, by Jerry Falwell, is touted as the largest Christian University in the world.  And in the afternoon they announced that openly gay, Richard Grenell, would be Romney’s new national security and foreign policy spokesman.
Students at Liberty were in an uproar.  Not over Grenell, but over the University choosing Romney instead of their beloved Ron Paul.  The firestorm began on the University’s own website, where the thread hit 700 comments in a couple of hours.  The discussion was promptly censored and then shut down proving that the University is not very aptly named.  But the discussion moved onto Facebook where it continues to spread.

For reference, Ron Paul beat Romney in the Liberty U precinct 60-40.

For those of you unfamiliar with the ways of the fundamentalist Christian, allow me to explain some things to you. The Holy Bible, is not up for private interpretation. It's not how you "feel" about what it says, it's not about what you "want" it to say. It's about conforming your life around every word it says. The figurative language is interpreted and the interpretation is taken literally. The Holy Spirit helps one along in understanding Scripture, but the essential thing to remember that it is the anchor that Christians are supposed to hold to in this enemy occupied territory known as the world, which may I say, is really showing its face these days!

With that being said, this piece of Scripture right here, located at the end of the Book is part of the reason why Romney doesn't fit in well at a place like Liberty:

For I testify unto every man that heareth the words of the prophecy of this book, If any man shall add unto these things, God shall add unto him the plagues that are written in this book. Revelation 22:18

I'm guessing an entire extra biblical book called the Book of Mormon would qualify as "adding unto these things". Over and over, during his ministry Christ warned us of false teachers, and of false Christs. I'm not going to blow your mind by getting into all that, but the fundamentalist position is that Mormonism is a Christian-based cult founded on an authority of a dubious book.  And if you're paying to go to a Christian school like Liberty, your first allegiance is to the God of the Bible, and not the Republican Party. The person giving the commencement address at a University that claims to exalt the Lord Jesus Christ should be one of like faith, wouldn't you think. But no, this university is being pimped out for political purposes. But wait, there's more...

Then, after announcing that a man that doesn't share their faith will be their commencement speaker, and after spending thousands on a biblical sound education, the students of Liberty find out that their commencement speaker will have an openly gay serving as his spokesman on issues pertaining to their beloved Israel. I'm sure God will just love that. I imagine that most of the kids at Liberty didn't follow that aspect too closely. But, gee, Romney campaign, it might have been good to space those two announcements out a little bit, don't you think?

Do Christians hate gay people? No, but it ain't right - it just ain't right, as in the parts don't go together.  I see them as victims of this messed up world, by which I mean victims of feminism, possibly chemical manipulation (BPA, soy-estrogen mimickers), pron, divorce, poor parental attachment, etc. After all the angst over gay marriage, it would seem that this announcement on the same day as announcing Willard "two face" Romney is going to be your commencement speaker would be laying  it on a little thick.

Explanations of Mitt-o-rama at Liberty


Why are they shoving Mitt Romney on Liberty University students? Answer: Mark DeMoss

Mark DeMoss was an adviser to Mitt Romney during the 2008 campaign and has never really quit, according to this article entitled, Evangelical Mark DeMoss says Christians Must Be Civil. No doubt Mr. DeMoss would find my plain quoting of Revelation 22:18 "uncivil" and divisive. Oh well, my Savior said to expect that kind of thing -- that the Bible is sharper than any sword, etc. DeMoss was also an aide to the late Jerry Falwell and a trustee at Liberty University. His PR firm, founded in 1991, does PR for lots of the well known evangelical organizations: Billy Graham, SBC, Campus Crusade, ACLJ ( I could do another post on this snake in the grass!), and basically every big name in Churchianity. Good Grief, is that list ripe for the blog-picking!

He tried to found something called the Civility Project, where lawmakers would sign a pledge to be "civil". He only got three signees.  Notice that the previous link goes to an article in the HuffPo that quotes an interview this fellow gave the NY Times. Let me tell you that a true blue fundamentalist never gets ink from there unless he's been found in some sort of "banjo player from Deliverance" scandal. This guy DeMoss is also a trustee at Liberty, so that explains how Mitt gets to be their commencement speaker.

But there's another opportunist in the sheepfold: Brett O'Donnell. He's the debate coach at Liberty University as well as an adviser and debate coach for John McCain in 2008, Michelle Bachmann, and prepped Mitt for the debates in Florida earlier this year. Let's go to the map: 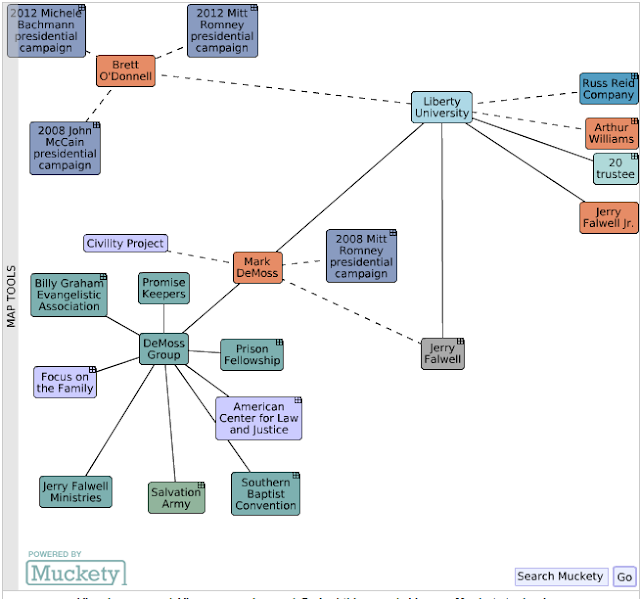 Muckety does not capture the image you painstakingly get into place like nndb, so I had to screen-shot it. But if you go to muckety, you can play around and get similar results.

My analysis: expect groups associated with these "one-foot in the evangelical world and one foot in the Establishment" types to get much more compromised in the future. I heard on the contemporary Christian station just yesterday, an ad to recycle your phones for Earth Day. Every discerning Christian knows that Earth Day is a communist-New Age holiday (same as Lenin's birthday) meant to diminish mankind. Look out, more divisive Scripture from Romans chapter 1:

Professing themselves to be wise, they became fools,
23And changed the glory of the uncorruptible God into an image made like to corruptible man, and to birds, and fourfooted beasts, and creeping things.
24Wherefore God also gave them up to uncleanness through the lusts of their own hearts, to dishonour their own bodies between themselves:
25Who changed the truth of God into a lie, and worshipped and served the creature more than the Creator, who is blessed for ever. Amen.


For you Christians who are poltically aware and like your documents literal (Bible AND Constitituion), follow Pastor Chuck Baldwin (who doesn't use PR) and Brannen Howse, who's uncompromising Worldview Weekend ministry doesn't go along to get along. This is pertinent  information for unbelievers trying to put together puzzle pieces as well, as the Feds are trying to make pastors spy on their flocks. Given the Establishment-loving nature of DeMoss, I would expect him to be gung-ho for that kind of program.

I think I may have stumbled onto a big knot of Establishment/Elite entanglement with the evangelical circles. Given my background in apostasy research, I'm seeing a lot of familiar names coming up as I scan through some of these connections. Oh joy, just what I needed: more things to blog about! Stay tuned.

Bottom line: Is voting for a Mormon wrong, if you're a Bible-believing blood washed saint? Depends on who all is running, but voting for a chameleon like Romney would give an atheist the creeps. Can I get a witness?
Posted by republicanmother at 5:10 PM