The public arena of ideas represented by our media: television, radio, and print have long been co-opted by leftists. The four main methods that the media uses to control the narrative, and thusly their lordship of public opinion are as follows: monopolize, manipulate, discredit, and promote non-issues. Here Yuri tells of his experience with American media back in the 60's and 70's:


The American media is a willing recipient of Soviet subversion. I know this, because I worked with American journalists and correspondents in Moscow while on the Soviet side, and after my defection to the West. People habitually refer to the American media as 'free,’ ignoring the obvious and commonly known fact that most of the most powerful media in the USA, is already MONOPOLIZED both financially and ideologically by what are referred to as 'liberals.’ American media 'chains' BELONG to fewer and fewer owners, who, do not seem to mind that the media is being almost totally 'liberalized.’ Liberalism, in its old classical sense, means above all, respect to individual opinion and tolerance to opposing views. However, in my own experience, communist defectors who have requested and sometimes literally begged, to have stories of their life in the Soviet Union told to the American people via the major American media have been completely ignored.

We all know now that virtually all American media is controlled by a handful of companies. We also know that they spend a great deal of time trying to reenact the high school preppy club, looking down on us dorky Constitution-respecting Americans. In their minds, they have ascended beyond reason. (Francis Schaeffer "line of despair" reference.) They are the Vorlon; we are still pathetic mortals, bitterly clinging to our morality and firearms. 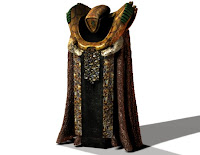 One of the most devastating methods of Soviet subversion in American media is the DISCREDITING of authors like myself and the information and opinion of those who come up with clear evidence of Communist crimes against mankind. This method is well described in my forthcoming book entirely dedicated to the activity of the 'Novosti' Press Agency.

I remember when you were roundly mocked for mentioning that you had ever listened to Rush Limbaugh. I thought it interesting that people who could not identify their congressman knew that Rush Limbaugh was stupid and felt a strong compulsion to tell you all about it. Why, you'd ask? Because that is what they had been told to believe. (Universal sufferage might not be the best idea, guys, it's not in the Constitution.) Well, no one's laughing now, chumps. I'm sure the discrediting routine is one or more of Alinsky's Rules.

You see a lot of non-issues in the media today. The world is literally falling apart and what is the media harping about? Global warming, that scientifically disproved idea that man has the ability to ruin the physical earth. If that's not a non-issue I don't know what is.  Yuri, wherever he is, must be laughing at the sheer ridiculous genius of it all. Behold, Mr. Bez tells us all about non-issues:


Introduction of NON-ISSUES is another powerful method of demoralizing at the level of IDEAS. It will take another full size book to describe in detail this method. Suffice it will be here to give a brief definition of NON-ISSUES. An issue, the solution of which creates more and bigger problems for majority of a nation, even though it may benefit a few, is a non-issue (civil rights of homosexuals is not an issue; defending sexual morality is the larger, real issue). The main purpose of non-issues and the devastating result of their introduction is the SIDE-TRACKING of public opinion, energy (both mental and physical), money and TIME from the constructive solutions. Soviet propaganda elevated the art of infiltrating and emphasizing non-issues in American public life to the level of actual state policy.

A few other non-issues that come to my mind are salt in food, recycling, most environmental issues, pre-K education, fat kids, etc. I'm sure some of ya'll can think up some good ones.

I would talk in detail about manipulation, but I think anyone who's read this far down on a blog such as this, doesn't need any explanation. If you sympathize with Tea Party movement and have noticed the lopsided press treatment of it, you know what I'm talking about.

Journalism has long since deviated from the four W's and how. For the last 40+ years, (and probably longer) it has sought to control the narrative of public discussion. With the advent of new media, their monopoly is slipping and hopefully those people who were clueless about their congressman are getting a clue.

Therefore I esteem all thy precepts concerning all things to be right; and I hate every false way.  ---Psalm 119:128

Note: All Bezmenov quotes are from his pamphlet, "Love Letter to America" h/t Useless Dissident
Posted by republicanmother at 8:13 PM