Education is an issue close to my heart because I know how many kids out there are suffering in the prison of public schools. I made my decision to homeschool when I was sitting in Economics class in high school watching VH1 pop-up videos. My daughter went to public school a couple of years before I pulled her out. If you want something done right, do it yourself. It's the American way. Let's see what Mr. Bezmenov has to say about demoralizing the education of a nation:


The Marxist-Leninist concept of education emphasizes 'environment' and 'mass' character of education over individual abilities and quality. When American media enthusiastically reports (repeating Soviet propaganda cliches) about 'achievements of Soviet science,' they usually obscure the IDEOLOGICAL aspects and purposes of the Communist system of education. 'Massiveness' and 'universality' of education attracts Western sociologists and governmental bureaucracies alike.

No Child Left Behind was a 'massive' and 'universal' piece of legislation passed by globalists George W. Bush and Teddy Kennedy, to name a couple. It violated our constitution's 9th and 10th amendments in favor of bringing America into the "global economy". If this kind of talk creeps you out, then opt-out this summer. Don't let the government brainwash your babies!

The Western public seldom receives the explanation of THE PRICE or the state-controlled Socialist-type education: political conformity to dictatorship, ideological brainwashing, lack of individual initiative in 'educated masses,’ lagging behind in development of science and technology. It is a commonly known fact that most of the Soviet 'technological marvels' are stolen, bought or 'borrowed' from the West. Most of the scientific and technological research in the USSR is 'productive' only and always in the most destructive area: the military. My motherland is still, after more than half century of 'victorious Socialism,’ a country without even common household refrigerators, and yet boasts of their 'space exploration' and tremendous military might, which have done absolutely nothing to improve the day to day life of Soviet citizens.

So the Price for this mass education is:
political conformity to dictatorship -Just see the lockstep to which the liberals, media, and education industry march.
ideological brainwashing - Jason Mattera has done work on this subject with his book, Obama Zombies.
lack of individual initiative in educated masses-  No one can deny there has been a huge decrease in the American work ethic over the last 30 years. This is because there is absolutely no incentive to work hard in the American public school. What would be the point? You're going to get promoted anyway, not to mention, that the classes are so dumbed-down, anyone with a pulse can pass. Well why don't their parents give them chores and make them work? When's that going to happen? On weekends or after school? So many kids are left or to themselves during those times that it's not happening.
lagging behind in development of science and technology- Not sure what the current state of our country's recent innovation, but I'll wager that American public school kids have little to do with it.


The American romance with state-run education as encouraged by KGB subverters has already produced generations of graduates who cannot spell, cannot find Nicaragua on a world map, cannot THINK creatively and independently. I wonder if Albert Einstein would have arrived at his Theory of Relativity if he had been educated in one of today’s American public schools. Most likely he would have 'discovered' marijuana and variant methods of sexual intercourse instead. Wouldn't you agree that KGB sponsored demoralization is not going to produce the dynamic, talented and fruitful young Americans of the future') Contemporary American permissiveness and moral relativity in education have greatly facilitated Soviet ideological subversion tactics.

The moral relativity is the greatest weapon of the collectivists. Indeed it was the first lie told in the garden: Hath God said? that unleashed sin on the world. On a much smaller scale, moral relativism introduced in public school system by social engineers such as B.F. Skinner, has opened a pandora's box of destabilizing  problems in our society. Our country used to pride itself in the overall integrity of its citizens. The press would extol political candidates service to their church, obituaries would tell how the deceased lived an upright life, the average citizen believed in a concrete right and wrong. Now our kids are unsure of what is right and wrong, in fact, most probably don't believe in this concept. Everything in their lives, from the media to their school curriculum, to their peer group relationships have no reference point for what is right or wrong.  This makes it easy to manipulate them into thinking anything the change agent desires. 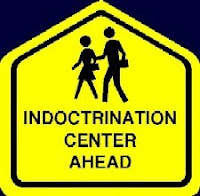 The main methods of Soviet DEMORALIZATION of American education are:
I respond in bold. Remember this pamphlet is nearly 30 years old.
1. Student Exchanges whereby American students and professors go to Moscow and are exposed to ideological brainwashing sometimes lacking the proper education that would allow them to assess the Soviet information they receive objectively.
Wasn't there a Simpsons episode about this?
2. Flooding of campus bookstores with Marxist and Socialist literature published both in the USSR and by domestic ‘fellow travelers’;
I think the literature is homegrown now. We are halfway through our 3rd generation of demoralization.
3. International seminars and conferences with Soviet participation, where Soviet propaganda seldom is balanced by opposing viewpoints;
Replace the word Soviet with the word Globalist. A globalist can be a republican or democrat, you can tell by how they vote. We call globalist republicans RINOS.
4. Infiltration of schools and universities by radicals, leftists, and simply 'disturbers,’ often functioning unknowingly under the direct guidance of KGB Agents of Influence.
This has already happened; now they've grown up and are running the country.
5. Establishing numerous 'student' newspapers and magazines, staffed with Communists and sympathizers;
Leftists are always trying to rope impressionable kids into their activism. i.e. Save the Whales, Recycling, tolerance cloaked in moral relativism.
6. Organizing 'study groups' and 'circles' for dissemination of Soviet propaganda and Communist ideology.
This is how the Hegelian dialectic works, and is going on in every classroom in some form or another. Most of the time, it happens without the instructor's knowledge. The curriculum drives the narrative, ergo the ruckus over the Texas textbooks.

Ok, chaps, what do we do now? It takes 10-15 years to start reversing the process. These years must be spent teaching our kids right from wrong. Education, the original definition, includes the character training and the importance of wisdom. God's Word tells us that the fear of the Lord is the beginning of wisdom. I begin each day, (or try to, anyway) with reading from the Bible and going over the meaning with all my kids. From the Bible, they learn from the source of ultimate wisdom, ancient history, philosophy, and the basis of Western Civilization. Also, we need to teach our kids the true story of the Revolution; read them the unabridged letters of the founders. Have them memorize portions of the Constitution and Declaration. In order to keep from being taken over by these leftists, we need to start now opting out of their evil, yes evil, education system.


It were better for him that a millstone were hanged about his neck, and he cast into the sea, than that he should offend one of these little ones.  -Luke 17:2

Note: All Bezmenov quotes are from his pamphlet, "Love Letter to America" h/t Useless Dissident
Posted by republicanmother at 4:02 PM