I Did Not Vote for this Man

That's right. I voted for democrat, Bob Tuke over Lamar, because I'd rather have my liberal straight up and not wearing an R by his name. 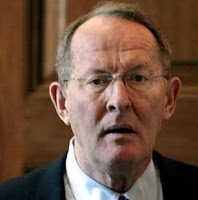 But the truth is the federal government probably doesn't have the capacity to do that. I think we ought to allow the administration, working with the government and others, to do its best to clean it up and make our verdict about the blame later. SCHIEFFER: But would you favor taking over BP if that became necessary? ALEXANDER: Sure. That's up to the president to decide. Under the law, we know who pays. That's BP. They're the responsible party. And we know who's managing the federal effort. That's the Coast Guard. But under the law, the federal government can take it over if they choose."

Tennesseans have got to stop elected pretty boy globalists disguised as conservatives. The ruse is wearing thin.
Posted by republicanmother at 4:29 PM