Talking about MK Ultra, the CIA backed psychology experiments that picked up where Dr. Mengele left off. These projects employed lots of former Nazis that were brought over during Operation Paperclip. If you are unfamiliar with this, then check out this vintage ABC special on it here that will bring you up to speed.
You'll find that it had to do with breaking individuals down and reprogramming them like robots to do the will of the programmer. The breaking down process involved electro and insulin shock, sleep deprivation, messages replayed over and over while in a drug induced sleep, and lots of drugs like LCD LSD.

Most of the files on MK Ultra programs were shredded in 1972. Seven boxes remained and were the subject of much of the Church Committee hearings on the CIA's doings. You can check out some of them for yourself here.


One of the most famous victim of MK Ultra was Ted Kaczynski who signed up for a psychological experiment as a Harvard undergrad. His brother talks about it here. As time went on, his mind began to fracture and we all know what happened. Maybe he wasn't so crazy after all:

In paragraph 127 we pointed out that if the use of a new item often technology is INITIALLY optional, it does not necessarily REMAINoptional, because the new technology tends to change society in such away that it becomes difficult or impossible for an individual tofunction without using that technology. This applies also to the technology of human behavior. In a world in which most children areput through a program to make them enthusiastic about studying, aparent will almost be forced to put his kid through such a program,because if he does not, then the kid will grow up to be, comparativelyspeaking, an ignoramus and therefore unemployable. Or suppose abiological treatment is discovered that, without undesirableside-effects, will greatly reduce the psychological stress from whichso many people suffer in our society. If large numbers of peoplechoose to undergo the treatment, then the general level of stress insociety will be reduced, so that it will be possible for the system toincrease the stress-producing pressures. In fact, something like thisseems to have happened already with one of our society's most important psychological tools for enabling people to reduce (or atleast temporarily escape from) stress, namely, mass entertainment (seeparagraph 147). Our use of mass entertainment is "optional": No lawrequires us to watch television, listen to the radio, read magazines.Yet mass entertainment is a means of escape and stress-reduction onwhich most of us have become dependent. Everyone complains about the trashiness of television, but almost everyone watches it. A few havekicked the TV habit, but it would be a rare person who could get alongtoday without using ANY form of mass entertainment. (Yet until quiterecently in human history most people got along very nicely with noother entertainment than that which each local community created foritself.) Without the entertainment industry the system probably wouldnot have been able to get away with putting as much stress-producingpressure on us as it does.

Now let's look at the Colorado shooting and ask some objective and critical thinking style questions:


How did the guy get that much gear, and estimated $20,000 worth on a student's salary? He spent an entire year booby-trapping his apartment, we're told. He didn't have any friends over for a year? How far into the PhD program was he, did he start arming up as soon as he got to Colorado? How did he get the experts to rig up his apartment like that? Why did he warn the cops if he was out to kill as many as possible?

According to his LinkedIn profile, James Holmes's father, Dr. Robert Holmes, who received a PhD in Statistics in 1981 from the University of California at Berkeley, worked for San Diego-based HNC Software, Inc. from 2000 to 2002. HNC, known as a "neural network" company, and DARPA, beginning in 1998, have worked on developing "cortronic neural networks," which would allow machines to interpret aural and visual stimuli to think like humans. The cortronic concept was developed by HNC Software's chief scientist and co-founder, Robert Hecht-Nielsen. HNC merged with the Minneapolis-based Fair Isaac Corporation (FICO), a computer analysis and decision-making company. Robert Holmes continues to work at FICO.

Here is the map for FICO, so you can see how this company is interlocked:
link


Here is Ben Swann asking these questions in a professional way. Here's to you Ben, the "last of the independents".


Bottom line: the USG has been working on the mind control thing for decades now. Since the time of the experiments, it would appear that they've gone operational. The fact that all this happens before the small arms treaty is suspect, especially how the 90% controlled media glommed onto the gun control argument before these poor victims' bodies were even cold.

How many coincidences make for a conspiracy? How long am I supposed to suspend my belief to allow for an "official story"? A good kid just goes bat-guano crazy AND just happens to have a multi-generational tie-in with intelligence, defense, and bankster connections. And because of that, I'm supposed to give up my guns? Seriously? I hope that this event serves as a wake-up call for anyone out there who doesn't get how our rights are being taken away. If more people wake up, then maybe these unfortunate victim's deaths won't have been in vain. To reference the Good Book again, "when they shall peace and safety, then shall destruction come upon them"(I Thess 5:3).  This means these demonic (an apt description, I think) forces will be using the peace and safety argument as a pretext for control right up until the end.

Saw a banner ad on top of Drudge this morning (wish I had screenshotted it) It featured a wild-eyed John Holmes with red hair and asked whether or not he should get the death penalty. A click on the ad takes you here - note it logged my location as TN. This just screams 1984 to me. The man hasn't had a trial yet and we have the above questions floating around. Good grief. 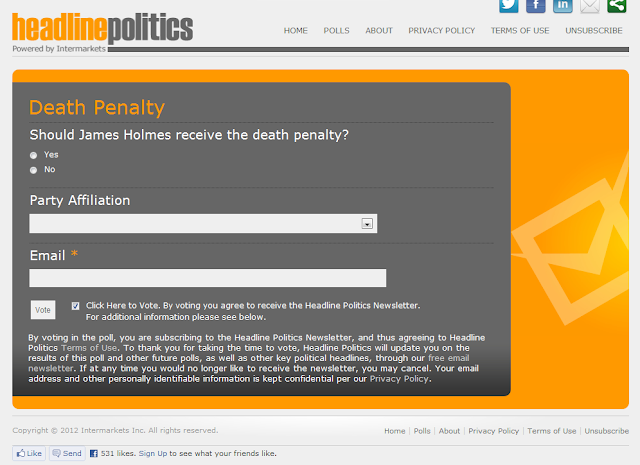 The other update is that a notebook was sent to a psychiatrist purportedly from Holmes, but it was held up in the mail room for a week. How convenient.

Posted by republicanmother at 1:36 PM