The Bez is back! In World Thought Police, ex-KGB agent Yuri Bezemnov aka Tomas Shuman, expounds on his role as an agent in the government-controlled news agency, Novosti. He worked in its branch in India and conveys how he used the principles of subversion in that country. 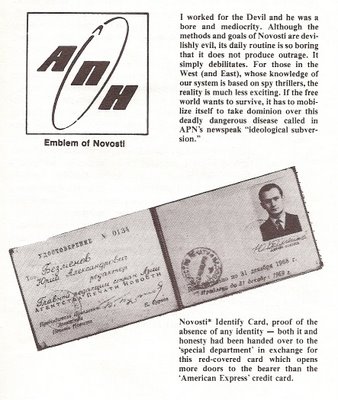 "During the last months of my career with Novosti, while contemplating defection, I often tried to assess the volume of evil I personally contributed to that done by my organization and my country. Was I really that guilty? Why should I feel guilty at all? My Soviet colleagues did not feel uncomfortable with their share of guilt. Neither did the foreign collaborators of Novosti. Nor the intellectuals and “progressive” Indians receiving our “blood money” in the form of some fraud like the “Jawaharlal Nehru Peace Prize.” Then how come, I thought, I single out myself for doing the evil?"

"Observing the world-wide destruction of human minds caused by my motherland, unresisted and unpunished, and meditating about how easily all that mind-warping could be stopped, I wanted to believe that there, in the West, some people and organizations we call “reactionary circles” know the situation and how to deal with our subversion. They had not done it, for some reason unknown to me at that time. But when needed, I thought, they would stop us, for their own good."

"Later, in India, I was surprised to realize that no one even thought we were doing anything wrong to their country. Are they blind and deaf? Or is there something that makes them unaware of impending danger? “I must defect and open up their eyes,” I thought. So I defected and started trying to open up their eyes. But no one wanted either my information, or to open up their eyes. People prefer to remain comfortably, blissfully unaware of things unpleasant. When I arrived in Canada I used to bother all sorts of supposedly knowledgeable people: the CIA, the media, politicians, “kremlinologists” and political scientists. And finally I realized that despite the abundance of reliable data, most of them simply don't CARE. “We don't give a damn,” as my former boss at Canadian Broadcasting Corporation said to me when I presented him my ideas on ideological subversion. They are “sitting pretty.” Wars are being fought somewhere far away from their three-bedroom homes. They dazzle the public (and themselves) with all sorts of illusions such as “peace talks,” SALT agreements, detente, etc. Some of the people I talked to were simply enfeebled snobs who wanted to be regarded as energetic and knowledgeable protectors of public interests (whatever that may mean). My impression is that they are mainly concerned with their own interests, their pathetic self importance. “What can we do about half of Cambodia being MURDERED?” Really, WHAT?"

Now doesn't that just prick your heart? The man leaves behind his family and country to come to the West to warn the world outside of the Iron Curtain about the principles of subversion, which we have addressed thoroughly on this blog, and no one cares. There is a good reason for that as followers of this blog may well know that those in the powerful elite have been working overtime to keep us distracted. Well, people are listening now as the water circles the drain.


"No, there are no “reactionary circles” hysterical about Communist genocide in Asia, Africa and Latin America. There are circles hysterical about apartheid in South Africa though. Hypocrites! The most “reactionary,” and “hysterically” so, are the Western lib-leftist literati, usurping well-salaried positions in the civil services, bureaucratized media monopoly, academia-- everywhere the public opinion is being forged and forced. It was these people who discouraged and obstructed publication of this material IN ANY FORM for almost a decade of “detente.” It was a well-educated ignoramus in one of the Western centers of “Sovietology” who wrote me that the information in my book is “obsolete and outdated.” One thing he should have known: nothing is outdated if we talk about the goals and methods of KGB-Novosti. Nothing has changed since the Chinese genius of subversion Sun-Tzu for the last 2,500 years of human history."

If you read Wall Street and Bolshevik Revolution, available in the X-files section, you find that certain powerful players in the United States were in on the ground floor level of the modern Communist system. I don't know if Yuri was aware of the whole picture when he came out with these booklets, that the nations of the world were moving together, kind of like pieces of the blob under centralized control. You see, everyone in the conservative media is sounding like Joe McCarthy these days calling everyone in the Obama administration a socialist, Marxist, or communist. And rightly so, but what so few if these same people seem to realize is that there are fascist elements to our government as well. Fascism is often known  as "crony capitalism", which I think is too kind a description. Fascism can be described best at this post at the Classic Liberal. Communism and Fascism are both means to an end which involves barracks surrounded by barbed wire. Anyway, we'll continue:

"I have written about Novosti will not become outdated until and unless Novosti itself disappears, together with the whole Soviet regime and the “World Communist Movement.” Until that time my book will remain an accurate, though impressionistic and highly opinionated, description of the largest subversion system in the history of mankind.

Of course, I present only a part of the whole picture. I have a suspicion that no one, including Novosti's top brass, knows the complete picture. In the Soviet secrecy-maniacal society it is typical for a right hand not to know what the left one is doing. My purpose here is not to present academic research on the Novosti Press Agency and the KGB (although some of my chapters may look as boring and as informative as that). My intention is to give you both feeling and substance in a somewhat personalized form. "

The fact that no individual in the system can see the forest for the trees is a key point. The idiot TSA agents don't see that they are instruments for "stripping away" the fourth amendment. Most of them probably don't know what the fourth amendment or even what the Bill of Rights are. If they had not been demoralized in the public school system, and been taught proper patriotism (which is different than nationalism entirely!) they would rather starve in the street than be a servant to the vile and unconstitutional Homeland thought police. Many government workers and those in the large corporations, which we see from the Fed's own records are really one in the same, suffer from this same compartmentalization. A worker is making a cog, not realizing it is the vital component to a doomsday weapon, which may be wielded by a maniacal government. Also, the genocide that Yuri notes can also be viewed through the lens of John Stockwell, the ex-CIA agent who blasted these wars and that "communists" were not the sole perpetrators. I actually try to be fair and balanced around here.

Under Yuri Andropov, the new generation of the KGB's “public relations” experts started to emerge: highly educated and well-trained graduates from Soviet schools, fluently speaking two or more languages, familiar with the history, literature, religion, ways of life, and socio-political structures of the target countries.

That was the time of the new “general line” of the CPSU CC (Central Committee). A new propaganda cliché was coined-- a “third way” of development for former colonies of the West (non-communist, and yet non-capitalist, but definitely an “anti-imperialist,” mainly anti-American, way of development). Implementation of such a policy required thousands of professional media workers, well trained in the Western style of reporting and in the processing of information and presentation of opinions and ideas in the most effective emotional way, appealing to the most basic, fundamental and primitive instincts of humans: fear (of nuclear war and/or nuclear confrontation with the USSR); self-preservation (would you rather live in a “cruel, polluted, profit-oriented capitalistic society” or in a “scientifically planned, rational, pollution-free, kind society with just re-distribution of wealth”); and love (of children, motherhood, peace, friends, class and race brothers, etc.)

Make note of that "third way", this term has been used by Bill Clinton and Tony Blair to describe basically the same thing, a synthesis of communism and capitalism. It has its own think tank which you can check out here: a moderate progressive organization it says. Note that Novosti used the emotions to play their targets, just as our media does today, conservative media included.

"The ultimate objective of the new policy and of the activity of such an instrument of this policy as the Novosti Press Agency is not to learn more secrets about the adversary, and not even to teach the masses in the West in the spirit of Marxist-Leninist ideology, but to slowly replace the free-market capitalist society, with its individual freedoms in economic and socio-political spheres of life-- with a carbon copy of the “most progressive” system, and eventually merge into one world-wide system ruled by a benevolent bureaucracy which they call Socialism (or Communism, as the final and supreme stage of this “progress.”)

To effect this gradual change, it is much easier and less painful (and less noticeable for the populace) to change the perceptions of reality, attitudes, patterns of behavior and to create wide-spread demands and expectations, leading ultimately to the acceptance of totalitarianism. Thus the media is the main target of manipulation by the KGB-controlled “independent, non-government, non-political, public organization” known as the Novosti Press Agency."

We've talked about this before when we went through the Subversion Process Study. The old frog in the pot routine has been used on many countries throughout the world. For America, the pot's been boiling for right at 100 years, which needs to be the subject of a whole other series!

All Yuri Bezmenov quotes come from the Useless Dissident  and I thank him for sharing these resources with the world.

Posted by republicanmother at 6:41 AM